The Results Are In: Bedtimes and Behavior Go Hand-in-Hand 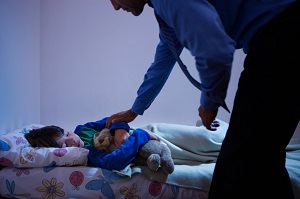 It’s a struggle parents and children alike know all too well: bedtime. For the lucky few who have been employing Super Nanny-esque or deep relaxation tactics from the time their wee ones were especially young, convincing their children to go to bed, stay in bed, and fall asleep at a reasonable, regularly scheduled hour may not be an issue. But for many families, bedtime can quickly become a daily nightmare.

A recent study conducted by a team of researchers affiliated with the International Centre for Lifecourse Studies in Society and Health (ICLS) and published online in Pediatrics found that irregularity and inconsistency in a child’s bedtime can disrupt circadian rhythms and cause sleep deprivation, which ultimately leads to behavior problems and impaired brain maturation. So even those who choose to avoid the potential stress of sleepy time by allowing their children to go to bed whenever they want may be unwittingly contributing to their offspring’s behavioral problems and mental maturation issues.

The National Institute of General Medical Sciences (NIGMS) defines circadian rhythms as “physical, mental, and behavioral changes that follow a roughly 24-hour cycle, responding primarily to light and darkness in an organism’s environment.” They are known to influence body processes like sleep-wake cycles, hormone release, and body temperature. When they become abnormal, circadian rhythms have been associated with obesity, diabetes, depression, bipolar disorder, and seasonal affective disorder (NIGMS).

It follows that children, who are in crucial phases of growth and development, are directly impacted by the regularity of their sleep schedules. Professor Yvonne Kelly of the Epidemiology and Public Health department at University College London (UCL) led the ICLS research team and likens the effects of irregular bedtimes to those experienced in a bout of jet lag. Jet lag is the common term for that groggy, disoriented feeling that sets in following an airplane flight, during which restful sleep is deprived by things like time zone changes and uncomfortable seats.

Imagine showing up to work or school every day feeling like you just stepped off a cross-country airplane. This may help to explain the correlations Kelly and her team discovered in their research.

Clear Connection between Bedtimes and Behavior

Experts analyzed data from more than 10,000 7-year-olds in the UK Millennium Cohort Study, a multidisciplinary research project funded by the Economic and Social Research Council (ESRC) that follows the lives of around 19,000 children born in the United Kingdom in 2000 to 2001. Bedtime data for the 10,000-plus subjects analyzed in this recent study were recorded at 3, 5, and 7 years of age. The researchers also assessed ratings of the children’s behavioral difficulties at these ages, which were provided by the children’s mothers and teachers. The specific behavioral problems reported include hyperactivity, inappropriate conduct, poor peer relations, and emotional difficulties.

Their findings included the following discoveries:

Luckily, the negative effects of irregular bedtimes appear to be reversible. If parents focus energy on enacting firm bedtime schedules, then presumably, undesirable behaviors will fade away as their children’s sleep-deprived minds get the rest they need.

But how do parents get their restless children to relax and fall asleep without all the drama?

Different people will have different methods that resonate with and work for them, but considering the widely known benefits of guided meditation with regard to relaxation, it seems worth a shot. As Ann Marie Sochia, LPCA and certified hypnotherapist, says, “It is never too early to learn to meditate.”

Sochia, a GoodTherapy.org Topic Expert, recommends that, in order to set the stage for deep relaxation at bedtime, parents or guardians should make sure any distracting stimuli such as loud music or television are turned off, and to keep the lighting in the room dim with a night light. If you have access to soft, relaxing music, feel free to turn it on. Sochia says this can enhance the experience for the child.

As an example, she shares the story of a child client who regularly fell asleep watching a violent television show about cops and criminals, and often complained of having trouble sleeping as well as numerous nightmares. “The lack of good sleep made her a difficult child in the morning, including being extremely hard to wake up, rude to her family, and not able to make it to school prepared or ready for a successful day of learning,” says Sochia. “I suggested she start listening to meditation music before bed. . . . It made all the difference. Now she is able to wake up on her own easily and feeling good about the day ahead.”

Bedtime meditation can be tricky if children are still in play mode, but Sochia assures that this can be an enjoyable learning activity for them. She suggests telling them to imagine something fun they did recently, perhaps even earlier that day, and as they’re picturing this scene, “to close their eyes and take several (three to five) slow and rhythmic deep breaths.” As they move through each breath, encourage them to focus on their breathing, in and out. Sochia adds, “At the same time I would also have the child listen to someone count to 10 in a soft, quiet voice while thinking about something relaxing.”

Ideally, the combination of quality time with a parent or guardian and guided meditation exercises will result in a sleeping child who wakes up well rested and ready to go the following morning. And as the ICLS study implies, this has the potential to drastically improve any behavioral challenges he or she may be experiencing.