Don’t Wait Until You’re Married to Have ‘The Talk’ 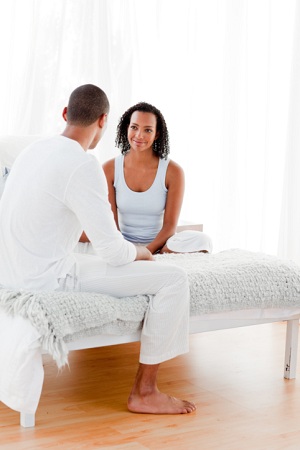 Although many people explore sexual activities with their partners before they get married, few people actually talk about sex. It’s one thing to be adventurous during the throes of a hot and heavy romance. But it’s another thing entirely to have a candid conversation about what you want, what you don’t want, and “what if…” with the love of your life. We have all had some form of sex education in school, but one thing we did not learn was how to talk about our sexual desires and different sexual scenarios. But according to a new article by Ian Kerner, author and sexuality counselor, couples contemplating marriage should have that conversation long before they walk down the aisle.

Spontaneity, creativity, and imagination are all part of what makes a new relationship thrilling. But as we get to know our new lovers, what once was racy and roaring hot becomes routine. After marriage, desires change. Kerner says this is partly due to the simple fact that those raging hormones have finally faded. But it also has a lot to do with physical changes in our bodies and emotional changes that occur as a result of normal life events. Having kids can also contribute to differing sexual appetites. He believes that it is important to talk about those issues and how you will address them before you get married. Patty Brisben, a sexual education promoter and advocate, agrees. “When you’re not able to openly talk about sexual preferences with your partner, those bedroom problems will resurface in other aspects of their relationship, and can lead to misdirected frustration,” said Brisben.

This is one of the main causes for infidelity. Rather than communicate with one another about their sexual wants and needs, partners avoid the discussion and instead assume they know what their spouse is feeling. This can lead to misinterpreted signals, rejection, and attention seeking outside of the relationship. Other experts agree that communication early on is essential to a thriving and healthy sex life later. Premarital classes and sexual therapists provide safe and secure places for couples to develop the skills necessary to have these discussions. And as uncomfortable as they may be, they are invaluable to your relationship. So don’t think about “The Talk” as a bad thing. Think about it as a way to safeguard your marriage.