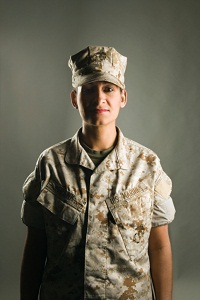 Whether you are thinking of joining the military, are an advocate against sexual abuse and violence, or simply want to watch a riveting documentary, I encourage you to see The Invisible War. Filmmaker Kirby Dick exposes the epidemic of rape within the U.S. military and its widespread cover-up. Watching the movie will most likely leave you horrified, angry, devastated, and weeping, and hopefully it will encourage you to take action against sexual abuse in the military and elsewhere.

Inspired by Helen Benedict’s 2007 Salon story, The Private War of Women Soldiers, and using Defense Department statistics, The Invisible War reveals that as many as 500,000 women and men in the U.S. military have been raped or sexually assaulted since World War II. One percent of men in the military are victims of rape, nearly 80% of all survivors never report for fear of retaliation and intimidation, and 25% of women do not report rape because the person responsible for receiving complaints often is the rapist.

The Invisible War takes viewers through a series of horrific personal accounts. The victims—mostly women, but a sampling of men as well—tell of the trauma of their rapes, and recount the negative backlash they experienced for reporting them. The story is sad: Our military promotes sexism and, by considering rape an “occupational hazard,” it promotes the notion that men are rapists and unable to control their urges.

The military’s comical yet sad attempts at “awareness” campaigns, with messages such as “ask her when she is sober,” reveals a culture of rape, an environment in which violence against women is normalized. Forty years ago, Susan Brownmiller wrote in Against Our Will that rape is not a crime of lust, but rather of “violence and power.” The Invisible War shows us the validity of such a statement and how women and men suffer in institutions where rape is allowed. In such institutions, one is surrounded by a culture of rape with ample use of misogynistic language, the objectification of women’s bodies, and the glamorization of sexual violence. Rape culture affects everyone—men and women are required to conform to stereotypical notions of masculinity and femininity rooted in patriarchy, and cultures of dominance of the males over the females.

The documentary also is an intimate portrayal of the effects and aftermath of sexual abuse and rape. Viewers will be saddened as they watch the heartbroken survivors, but they will also become enraged at the military’s inability to protect them or, worse, its efforts to silence them.

This story is best illustrated by the case of Kori Cioca, a Coast Guard veteran who was attacked while serving in Michigan. Her assailant beat her, leaving her with post-traumatic stress and a dislocated jaw. Revictimizing her, the Department of Veterans Affairs repeatedly refuses to treat her or to cover her medical expenses. Cioca continues to suffer from a broken jaw, forcing her to live on a liquid diet. She cannot go outside when it is cold because of pain. Her assault remains with her both physically and emotionally: She often wakes up screaming in the middle of the night, and can hardly tolerate sexual intercourse with her husband, to whom she professes her love. The response of the military to her emotional harm was hardly better than the response to her physical pain. Instead of providing therapy for PTSD, she was fed countless pills in an effort to make the problem disappear.

As survivors explain in the movie, the trauma of shame comes from being punished in reporting the crime, and often this punishment is much more damaging psychologically than the rape itself. Statistics show that rape, sexual assault, sexual harassment, and their attendant consequences often are risk factors for PTSD, and for women veterans in particular there is an added risk of homelessness. In 2010, for example, 39% of homeless women veterans screened positive for military sexual trauma. And women who have been sexually abused during military service have a higher incidence of PTSD than men who have been in combat.

The courage displayed by the survivors who participated in this film is powerful and overwhelming. Toward the end of the film, we are told that two days after watching The Invisible War, on April 14, 2012, Secretary of Defense Leon Panetta implemented new steps to stop assaults and make it easier to prosecute offenders. He also established a special victims unit for all military branches. Yet these acts are not enough. We must advocate to change the culture of the military.We must also advocate that veterans receive proper medical care, including psychotherapy by a therapist who understands and is trained in issues dealing with sexual trauma and abuse.

As a therapist counseling victims of sexual abuse and trauma, I have heard horrific stories and witnessed the power of healing and the resilience of survivors. I have seen victims transform into survivors and some into powerful advocates against sexual violence. Yet I always encourage therapists and clients alike to go a step further and challenge systems that promote trauma and abuse. As citizens of this country, we cannot afford to be passive audiences, watching a documentary, feeling empathy yet returning to our lives as the credits roll. We must take action.  Whether you encourage others to see the movie, visit www.NotInvisible.org and seek ways you can help, get involved with the Service Women’s Action Network, or ignite political action alongside survivors to hold the military accountable, you can play a role in ending rape culture.

The Invisible War is not an anti-military movie. Its message is that these soldiers, who still believe in serving their country, deserve better. We all deserve better, and we all need to promote justice. Spread the word and stand in solidarity with survivors as we hold the military accountable and, in the process, reveal zero tolerance for rape and sexual abuse.