PTSD and Self-Soothing Behavior: When Trying to Feel Better Hurts 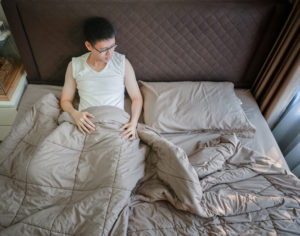 Self-soothing is as natural to people as breathing. Even as infants, we quickly learn the soothing results of sucking our thumb when our mother’s nipple isn’t available. As we grow, our repertoire expands as our world expands. The soft touch of a flannel blanket or a plush toy may be our next source of comfort and emotional support. For many of us, food and drink are the go-to sources of comfort beyond our bodies.

How many happy memories are attached to good times with family and caregivers? As adults, many of the ways we make ourselves feel better are by invoking those memories through the powerful sense of smell, cooking or consuming old favorites whose aromas awaken a multisensory memory. Holidays and special occasions are built around re-creating many of these old favorites, amplifying the current experience by invoking the past.

Sometimes, however, self-soothing can become a problem. It often seems to happen when there is posttraumatic stress (PTSD) in the background, such that self-soothing behaviors are over-used and become a source of difficulty in and of themselves. Some of the ways people try to cope with the symptoms of PTSD are:

Eating is a way that most of us self-soothe. An ice cream binge is a stereotyped way to deal with a major disappointment. Actually, both over-indulgence and over-abstention can lead to health issues.

While we’re all familiar with overeating as a possible problem, anorexia and bulimia are other ways people can use food to self-soothe. It may seem counterintuitive for someone to restrict the amount of food they take in (or keep in) as a source of self-soothing, but many experts believe this is a way of exercising control over an area of their lives which many people find satisfying as a way of combating PTSD which otherwise leaves them feeling overwhelmed and out of control. Specialists who treat eating disorders have consistently confirmed this observation (Brewerton, 2007).

Like eating, drinking to “drown our sorrows” is a well-established cultural meme. While it’s certainly not condoned by health professionals, we all know of mature individuals who have dealt with a major disappointment by overindulging in alcohol. While this can be a slippery slope toward dependency, use of other substances can be even more dangerous. The addictive nature of marijuana is widely overlooked. Drugs such as cocaine, methamphetamine, and opiates are highly addictive, and almost everyone is aware of those dangers. Tobacco use is usually initiated through cigarette smoking, which in addition to the effects of nicotine provides reinforcement through the sucking reflex, the life-giving behavior which supports our earliest efforts to sustain life. (This is why nicotine patches alone often fail to provide relief to people who want to stop smoking.)

What many people do not recognize is that these dangerous methods of self-soothing are usually turned to by people experiencing severe symptoms of PTSD who feel the need for greater comfort. It is believed that 50% to 66% percent of those who experience PTSD symptoms may also have addictive behaviors. There is a tendency to stigmatize people who have this kind of problem as being somehow morally deficient. The truth is, many have undiagnosed and untreated PTSD, usually experienced in childhood.

Running when our knees hurt, lifting weights despite an injury, not giving our bodies time to recover (like exercising seven days a week) are all ways in which we can hurt ourselves while appearing to be pursuing “health.”

Everyone recognizes the importance of exercise to good health. The more the better, right? Scientists have told us there is almost no limit to the amount of exercise which is good for us—the benefits just keep adding up. However, what they are addressing is healthy, nondestructive exercise: a variety of types of exercise, including stretching, aerobic, and anaerobic exercise like that found in cross-fit regimens and yoga. This type of exercise lowers our blood pressure and improves our cholesterol and sense of well-being. It is frequently prescribed as a component of a complete PTSD recovery program. The latter is supported by the generation of endorphins when we exercise—those hormones which make us feel good after we’ve been exercising for about 20 minutes.

Like anything else which makes us feel better, it’s possible to become dependent on those endorphins and thus exercise to extremes in order to enjoy the benefits. Running when our knees hurt, lifting weights despite an injury, not giving our bodies time to recover (like exercising seven days a week) are all ways in which we can hurt ourselves while appearing to be pursuing “health.” Often, people who exercise in this way may appear to have some sort of obsessive compulsion; my experience with people who behave this way strongly suggests they are dealing with some overwhelming and irrational fear, almost always tied to some childhood trauma which resulted in PTSD.

Among the many self-soothing behaviors are various forms of nonlethal self-mutilation. Usually, this takes the form of cutting behaviors. People who do this may repeatedly cut themselves with a sharp instrument, such as a knife or razor. Others may stick themselves with pins or burn themselves.

The explanation given by many people who engage in self-harm is that the pain is a distraction from the extreme emotional discomfort they are feeling. Explanations from those who do this include “to distract from painful feelings” and “to punish themselves” (Gibson & Crenshaw, 2015). Cutting or other self-mutilation gives them a way to exert control, like eating disorders, and distract themselves from their emotional pain. Several studies have found that the vast majority of people who engage in such behaviors have trauma in their background.

There are five types of treatment for PTSD which are recognized by the Substance Abuse and Mental Health Services Administration (SAMHSA) as being “evidence-based”: cognitive behavioral therapy (CBT), cognitive processing therapy (CPT), prolonged exposure therapy (PET), eye movement desensitization and reprogramming (EMDR), and accelerated resolution therapy (ART). The first three use a combination of education, discussion, and homework to work through the effects of PTSD. They generally require 12 to 20 sessions and are about 70% successful, on average. EMDR uses eye movements and suggestions to deal with trauma; it generally requires eight to 10 sessions and is also about 70% successful, on average. ART uses eye movements and suggestions, requires three to five sessions, and appears to be about 90% successful. As with any treatment, your mileage may vary; there is no one-size-fits-all treatment approach.

If you know someone who is indulging in extreme self-soothing, consider whether they might benefit from one of these types of treatment.