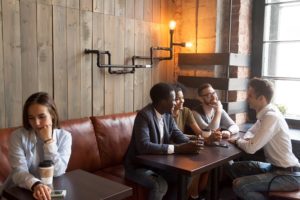 The silent treatment is widely regarded as a form of emotional manipulation and even psychological abuse. It is the act of ceasing to initiate or respond to communication with someone else or refusing to acknowledge them altogether. It is also referred to colloquially as the “cold shoulder,” “sulking,” or clinically as ostracism.

In relationships, the silent treatment might manifest when one partner becomes withholding in the middle of an argument and begins refusing to engage in any way to further the discussion.

What Is the Silent Treatment?

Though it may look different from one interaction to the next, the silent treatment is generally one person’s efforts to shut out another person. It can occur in any type of relationship or setting, including between:

There are many reasons someone might try this strategy. Some people who believe they have high self-control might use the silent treatment as a way of “taking the high road” or what they see as not succumbing to the level of communication happening with the other person. Others see it as a rational reaction to a problem or conversation, rather than an emotional one.

Stonewalling is another form of silence and an attempt to shut out another person. Some differences lie in the time frame, as stonewalling generally happens in the course of a conversation, while the silent treatment could last weeks, months, or even years. Stonewalling may also be an attempt at self-protection—that is, an individual is acting out of fear of the other person or fear of conflict, rather than malice.

Signs of the Silent Treatment

How the Silent Treatment Affects Relationships

Some evidence suggests women may respond differently to the silent treatment than men. For example, a study of workplace collaboration shows women were more likely to compensate or attempt to become even more proactive and communicative when ostracized from a group project, whereas men were more likely to give up or “loaf.”

People who have been ostracized describe feeling less than human and tend to believe the person who has ostracized them also believes they are less than human. When a child or partner feels someone close to them challenges their humanity, it can severely threaten many aspects of mental health, such as self-esteem, belonging, control, and meaningful existence.

Is the Silent Treatment Emotional Abuse?

Ostracism and the silent treatment are often examples of emotional abuse. While some people may be more resilient to this type of abuse, others can experience it as acutely as prolonged neglect or even other physical forms of abuse. In some cases, the person using the silent treatment may believe they are sparing the other person a more harsh or emotionally-driven response. They may think they are choosing to be silent to avoid escalating arguments or to spare the other person’s feelings. Ultimately, however, the silent treatment is a method of manipulating, punishing, or gaining control over another individual.

Stonewalling may look very similar to the silent treatment; some authors and therapists use them interchangeably. Both may be forms of control or manipulation of another person, depending on the situation, and each bears similarities to other emotional abuse tactics. The silent treatment and stonewalling are sometimes associated with individuals who have narcissistic personality traits, but it cannot be said anyone who employs them is narcissistic.

Therapy for the Silent Treatment

Working with a therapist can help couples identify conflict resolution tactics that better serve both partners and do not ostracize one or more parties. Someone who has repeatedly experienced the silent treatment from partners, family members, or other individuals may benefit from individual therapy to help rebuild self-esteem. In some cases, trauma healing techniques such as eye movement desensitization and reprocessing (EMDR) can help someone who has posttraumatic stress (PTSD) symptoms related to ostracism.