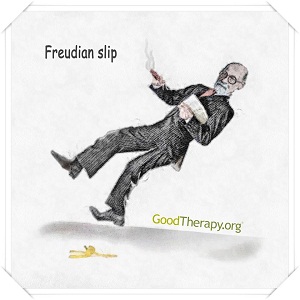 A Freudian slip is an error of speech that occurs when a person says something different than he/she intended to say.

What is a Freudian Slip?
The technical term for a Freudian slip is parapraxis. Parapraxis occurs when someone says something different than what they meant to say while speaking. According to psychiatrist Sigmund Freud, the slip is interpreted as the emergence of the contents of the unconscious mind. For example, a woman might mean to tell her friend, “I am so in love with John.” But instead of saying John’s name, she might say the name of her ex-boyfriend instead. Her friend might then interpret her slip to mean that she is still in love with her ex-boyfriend.

Freudian Slip in Popular Culture
Freudian slips are commonly used as humorous devices in literature and movies. The term is commonly applied to many different errors in speech, but Freud originally intended to use the term only for a limited number of slips that he believed to be the result of the workings of the unconscious mind. There are many alternative explanations for Freudian slips, including speech habits, difficult or complex sentences, exhaustion, or thinking about something else while speaking. Contemporary mental health professionals do not generally use Freudian slips as therapeutic tools to gain insight into clients’ minds.