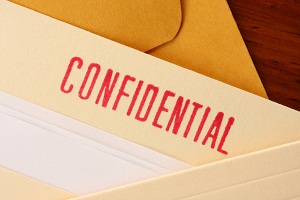 Client confidentiality is the requirement that therapists, psychiatrists, psychologists, and most other mental health professionals protect their client’s privacy by not revealing the contents of therapy.

WHAT IS CLIENT CONFIDENTIALITY?

Confidentiality includes not just the contents of therapy, but often the fact that a client is in therapy. For example, it is common that therapists will not acknowledge their clients if they run into them outside of therapy in an effort to protect client confidentiality. Other ways confidentiality is protected include:

For licensed mental health professionals, confidentiality is protected by state laws and the Health Insurance Portability and Accountability Act (HIPAA). Therapists who break confidentiality can get in trouble with state licensing boards. They can also be sued by their clients in some cases.

Some people working in mental health, such as phone crisis counselors or life coaches, are not licensed by their state. These people may not be legally required to protect client confidentiality. Yet most agree not to reveal identifying information about their clients anyway.

Licensed mental health professionals can break confidentiality in some circumstances. One of the most common scenarios is when a client is a threat to himself/herself or others, in which case a therapist must notify the person in danger or notify someone who can keep the client safe. In these circumstances, therapists often seek hospitalization for their clients.

It is important to note that a therapist will not automatically break confidentiality if a client reports thoughts about suicide. Typically, a client needs to state an intent to act on those thoughts and have a specific suicide plan before hospitalization is considered. An individual will not be hospitalized against their will for simply seeking help.

Most therapists are happy to go over any confidentiality concerns before starting therapy. A therapist may also be required to break client confidentiality if they believe a child or disabled person is being abused. For example, if a child has unexplained injuries and acts frightened of their parent, a therapist may have reasonable suspicion of abuse. As a mandated reporter, they have a legal duty to report their suspicions to authorities.

In rare cases, therapists can be forced to testify against their clients through a subpoena. However, it is much more difficult to force a therapist to testify than it is to force a non-licensed mental health professional. Laws governing therapists are much stricter about confidentiality.

Confidentiality for children is a hotly contested issue. In many jurisdictions, minors are not considered developed enough to consent to treatment, so parents are expected to consent on their behalf. Thus, minors do not have the strong confidentiality rights that most adults have in those places. However, in states like Washington, minors 13 or older do have comparable or even identical rights to seek health care (including mental health care) and to have their privacy protected as adults.

A lack of confidentiality can interfere with the therapeutic relationship. A child may be reluctant to disclose information to a therapist if they know their parents will eventually learn about it. To promote trust with the minor in therapy, many clinicians seek the permission of the clients’ parents to keep therapy confidential.

Even when parents do not agree to confidentiality, therapists will not typically reveal details about their discussions in therapy. Instead, they will give information about broad treatment goals and progress. For example, a therapist may report that a child has anxiety and is being treated with cognitive behavioral therapy. However, they would not have to report that the child is stressed about getting low grades in school.

At the beginning of treatment, a therapist may offer a client paperwork detailing their privacy policy. This information may be part of the informed consent form, or it could be its own paper.

Most confidentiality forms start off with a small paragraph explaining how the information shared in therapy will be kept private. The form may then list scenarios when confidentiality may be broken, such as if a person declares suicidal intent.

If a therapist takes insurance, they may ask for a client’s permission to share relevant information with the insurer. Typically, the information revealed is limited to the diagnosis being treated and any medications required. According to HIPAA, therapists should not reveal any more information than is necessary to ensure coverage. If an individual refuses to give permission, they may still go forward with therapy, but they will not be able to get insurance to pay for it.

Most therapists are happy to go over any confidentiality concerns before starting therapy. You can find a licensed therapist here.