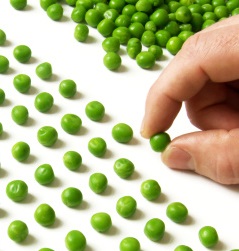 A few days ago, I headed into the locker room at my gym after a workout. A TV was tuned to a morning talk show hosted by a couple of women who were talking to their guest, a dietician, about yo-yo dieting. The hosts peppered their guest with questions, speaking so quickly it was giving me a headache.

The poor dietician was attempting to explain the effects on the body of losing and re-gaining weight, the functions of ghrelin and leptin (hormones that are involved in appetite regulation), and the importance of eating enough healthful food throughout the day to maintain blood sugar levels and provide nourishment. Her responses were being trampled by the hosts’ enthusiastic comments and inquiries.

I thought about what the dietician was saying: eat well, eat breakfast, eat moderately, eat often enough, give your body what it needs. She wasn’t answering the hosts’ questions by giving tips for quick weight loss. She was describing the hazards of dieting and the importance of informed, balanced eating. It wasn’t sexy, it wasn’t what generally makes for tantalizing television. It was sound information and wise advice. I imagined that the hosts were trying to keep their viewers from changing channels by keeping things moving and asking about topics they knew would maintain viewers’ interest, such as how to lose weight and lose it quickly.

I’ve asked the members of the groups I run for women with disordered eating whether they would want to change their relationships with food if it had no effect on their weight and size. They usually look at me quizzically, as though I’d asked if they would be interested in breathing if there were no air. I explain that this question is to help get their focus off of weight and onto the issues driving their eating problems. A troubled relationship with food is about something else—emotional and psychological hungers, a fractured relationship with one’s self. But weight, be it anxiety around gaining it or desire to lose it, grabs the spotlight. Our society, with its ever-increasing obesity rates and “War on Obesity” rhetoric, loves weight management and dieting. TV shows like “The Biggest Loser” draw big audiences. Yet chasing quick weight loss takes a person further and further away from a healthy, relaxed relationship with food and body.

In order to move from a conflicted relationship with food to a healthy and peaceful one, one must, ironically, let go of the attachment to being thin. I use the word “attachment” here in the Buddhist sense: that what we attach ourselves too—what we must have, what we refuse to let go of—entraps and imprisons us. A story I heard a long time ago illustrates this concept: a zookeeper approaches a monkey in a cage, and holds out a piece of candy. The monkey slips his hand through the bars and grabs the candy. He tried to pull his fist back through the bars, but cannot. He is stuck. In order to get his hand back into the cage, he must let go of the candy. But he wants the candy. So he keeps holding on, and can’t go anywhere. But he gets to keep the candy, with his fist stuck outside the cage, and with the hope that somehow he will eventually figure out a way to eat it.

The flip side of attachment is aversion: operating in a way that prevents or avoids what one fears or can’t tolerate. The counterpart to “attachment to thin” is “aversion to fat.” Both of these entail being stuck in a way of living in which self-worth is tied to the size and weight of one’s body. It means not being free, not being comfortable in one’s own skin, needing to be thin to feel OK about one’s self. Being well and whole involves being willing to encounter our aversions. It means letting go of the object of our attachment if it prevents us from being free.

This doesn’t make for compelling television or gossip. It doesn’t sell diet books or weight-loss supplements. Instead, it paves the path to a comfortable, secure relationship with one’s self.