Surviving Child Abuse: Why It Can Cause a Pattern of Avoiding Feelings 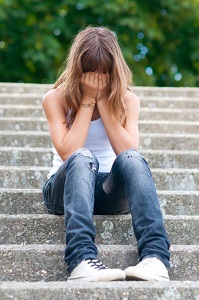 Many people who have survived childhood abuse are very skilled at avoiding their feelings. You might ask why they would do this, but it actually makes a lot of sense. As a helpless child, trapped in an abusive household, subjected to daily or sporadic abuse, the feelings were overwhelmingly painful. You either knew that you would be constantly bombarded with abuse and the resultant flooding of emotions, or that you would be hit with the abuse eventually, when you least expected it, also resulting in a flooding of emotions. Eventually, children in these situations just wanted to escape the emotional pain. So they slowly began to avoid the painful emotions—both consciously and unconsciously.

Unfortunately, in adulthood this practice becomes a habit. When you carry buried emotions from the past, you can end up struggling with depression and/or anxiety and have no idea why. This can continue until you learn to deal with it. If this is a lifetime habit of yours, a licensed therapist can be invaluable in helping you to resolve those old painful memories and the resulting emotions. Sometimes people hold on to old feelings, because those feelings feel familiar; change is scary! To let go can feel terrifying and can sometimes cause individuals to hang onto their feelings, even though they feel miserable in doing so. While exploring these old feelings with a therapist skilled in survivor work, you can learn where the feelings originated and why you can’t seem to let them go. Sometimes it’s simply because you aren’t aware that there’s anything to let go of!

In the beginning, when you felt you were in danger of being abused, you might have felt your heart racing, your breathing might have became shallow, you probably began to sweat and/or get cold chills; a whole host of other sensations might have taken place in your body. On an emotional level, maybe you began to cry, or perhaps you got angry. Maybe you cowered in fear, or hoped that you could persuade your abuser to leave you alone. But definitely, you experienced those physical sensations and reactions—your mind and body took notice and you took action to protect yourself.

Perhaps you ran and hid. Perhaps you covered up a mess you had made so that your parent wouldn’t learn of it and punish you for the incident. Perhaps you learned to blame it on a sibling (and then suffered the resulting guilt when you saw your brother or sister being abused for something which you had actually done). Eventually, though, when you learned as a child living in an abusive environment that you didn’t stand a chance of protecting yourself, you learned to shut off your feelings. You were trying to survive; perhaps figuratively and/or literally. Therefore, when a parent or other adult hurt you verbally, emotionally, physically, and/or sexually, you learned to disconnect from those overwhelming feelings since they were just too scary!

Although many are fearful, as adults, of getting in touch with their feelings, those feelings can actually help you to heal and to grow into a healthier adult. Feelings and emotions can play a positive role in your life, once you learn to understand them and what they are saying to you. You can learn to see your feelings and emotions as a friend, guiding you along in your life’s journey. You can learn to trust your gut feelings and make progress in doing so, along with the help of a skilled therapist who understands the process. Although this is not necessarily a fast process, it is definitely worthwhile. Ironically, when you begin therapy, you often want to continue disconnecting from these scary feelings, since this has served you well in your past. Unfortunately, in adulthood, this coping mechanism no longer works to your advantage and you must learn new ways of coping.

If you were hurt as an infant and/or toddler, you learned to be fearful and mistrustful of others. You may have gotten the message that you were unlovable or that you had to earn love from others. As adults, this can cause many problems in your adult relationships, whether with spouses, partners, co-workers, neighbors, etc. Even if you want to trust and not be fearful, those old habits are hard to get rid of, especially since they served you well for so many years.

When you were being abused as a child, you were being abandoned—whether literally or figuratively. Parents who were not there (physically or emotionally) for their children, leave these children feeling fearful that they are unlovable, and as a result, may be hurt and/or abandoned. The child gets the message that it’s unwise to count on others for getting their needs met, and to, instead, count only upon themselves. This message tends to live on well into one’s adult life, unless one gets proper help. Some adults who have survived child abuse may experience feelings of a need for control or even fall into patterns of abusive relationships.

I encourage you to get help and not allow this pattern to continue in your life. There are many good therapists who can help you to overcome your obstacles, which were created from the past. There’s no need to continue suffering. Help is available, and you truly can experience a happier and healthier life, both emotionally and physically!