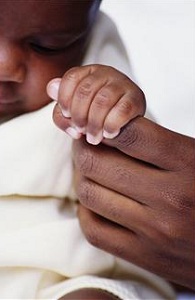 Many people believe that postpartum depression is caused by the hormone shifts that occur in a woman after she gives birth. In our culture, we attribute women’s emotions to sex hormones, while we attribute men’s emotions to whatever situation they happen to be in (this link opens a PDF). But these myths, and the biological determinism that it is part of, actually make matters worse. People who assume that emotions are primarily caused by biological changes that are outside of their control tend to cease active coping. The way we define a problem shapes how we look for solutions, and it can lead us down blind alleys. It is much easier to assume that postpartum depression happens to women who give birth as a result of those hormone shifts than it is to really take a hard look at the ways our culture is not helping couples make the transition to family. And the reality is that postpartum depression happens just as often to adoptive mothers as it does to birth mothers (that’s 15% in our culture), and it happens to fully 10% of dads (which is twice the amount of depression found among men at other times in their life).

There are three legs to a tripod and there are three sides to depression: the biological, the psychological, and the social. The very most recent research shows that the biological vulnerabilities to depression are temperamental—meaning the hardwired ways that people are born sensitive to being startled, vulnerable to sleep disruption, reactive to interpersonal upsets, and so forth. But it is very important to understand that there is no single gene for depression and there is no gene that, when combined with stress, results in depression. This means that we have to be a whole lot more circumspect and cautious about how much depression we attribute to genetics.

Genetics are outside of your control. That might let you off the hook if you’re prone to self-blame, but it won’t do you much good when you’re trying to cope. Genes are permanent—you’re born with yours, and outside of some pretty extraordinary circumstances, they’ll remain with you for all of your life. Genes are also pervasive—they’re part of every fiber of your being and you can’t get away from them. Genes are permanent, they’re pervasive, and they’re personal, but they’re outside of your control and any attribution for a negative event (depression is a negative event) that is permanent, pervasive, and personal is, in and of itself, a risk factor for depression. Did you get that? Your attributions, how you explain the bad stuff that happens to you, what you say causes the rotten feelings you have, those explanations can be the very things that put you at risk for depression.

By the time you reach adulthood you have likely developed habits: habits in how you think, habits in how you relate to others, and habits for coping with the unpleasant things that happen. If you have learned to think pessimistically and to take responsibility for bad stuff that isn’t even under your control, then you’ve probably rehearsed the habits of thought that put you at risk for depression. By the time you reach adulthood you’ve also probably developed some pretty powerful preferences for coping and for relating to others. Some of those coping styles, if overused, inflexible, or not sufficiently contextual, will also set you up for depression. So the good news is that most of the risk factors for depression are learned and can therefore be unlearned. And the bad news is that learning new habits costs a bit of effort, has a learning curve associated with it, and can therefore be frustrating at times.

Join me for a journey of into the many factors that cause so many women and men, birth parents and adoptive ones, to get depressed after bringing home baby. We’ll explore aspects that have to do with history and culture as well as the standard habits of thought, habits of relating, and habits of coping that modern research shows us to be the traps that lead to depression. Join me in this journey if you believe that accurate understanding leads to better, more effective treatment, or if you want to really be empowered to stop depression in its tracks and manage your risks to prevent depression in the future.

Related articles:
Taming the Brain
Even Dads Can Get Postpartum Depression
Some Thoughts On Embracing Motherhood: Tips for the Sleepy New Mom