Even Dads Can Get Postpartum Depression 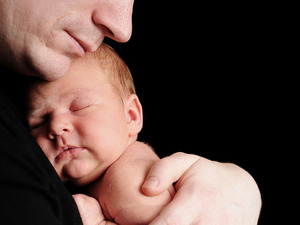 Yes, it’s true. One in four new dads have postpartum depression (clinical term is Paternal Postnatal Depression or PPND) after the birth of a baby. What this means in simple terms is dealing feelings of being down, depressed and anxious after the birth of a baby. The good news is that, fortunately, more and more information is being shared with the public about how common and how treatable postpartum depression is in women. And, the reality is that it’s just as treatable in men as well! We can’t forget those daddies!

Clearly, parents need and deserve support after the birth of a baby, and most especially if they are exhibiting any signs of postpartum challenge (including severe insomnia, appetite changes, feeling low down, excessively worried, overwhelmed, intrusive thoughts of harm befalling baby or loved one, etc). These concerns can manifest any time during the first year after the baby’s birth. It’s important to get help if you are experiencing such feelings.

Some wonderful resources are:

Often with dads who have PPND, there is a sense of isolation (perhaps his partner also has depression or is less available because of baby’s demands), overwhelmed with financial responsibility, feeling burdened, extreme sleep deprivation, and adjusting to role of fatherhood and the responsibilities associated with it. Although dads do not have the hormonal influence that moms experience as a contributing factor to postpartum challenges, dads do experience sleep deprivation and the challenge of becoming a new father for the first time (or a father to more than one child).

Dads can receive support from psychotherapists who specialize in helping families transition into parenthood and family life. The above websites have either volunteers or therapists who can direct you to therapists in your area. It is important to get help immediately and also if your partner is struggling with depression as well. The family unit thrives when both parents (in a two parent household) are receiving the support and guidance they need to parent well and feel well as individuals/couples.

Left untreated, postpartum depression in either mom or dad can have really deleterious affects on the entire family. Therefore, support and resources are vital to encompass the entire family. Many are afraid to reach out and get support due to stigma associated with mental health challenges. However, more and more people are assisting with destigmatizing postpartum issues because of the number of people affected by such challenges. Clearly, brain health is essential. With help, all members of the family function optimally.