Effects of Subtle Peer Group Bullying on Development of the Self, Part I 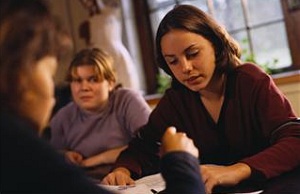 Growing up with feelings that your peers don’t like you or don’t accept you into their group can have lifelong negative effects. While we have fortunately become more aware of the dangerous effects of bullying on children, we often do not pay enough attention to more subtle forms of bullying that affect the development of self-worth, self–esteem, and self-confidence. Many adults continue to think of themselves as if they were still the 12 or 13 year old who sat alone in the lunchroom, who was whispered about as fat, or who never was invited to parties. It takes work to change this negative self-identity. One must get to know how it developed and come to accept that one’s sense of self is not a fixed entity but continues to develop and change throughout one’s lifetime.

Perhaps more than any other problem that my therapy patients bring to treatment is the feeling that they are not valued, liked, or worthy. Some characterize themselves as “losers.” Some tell me “I am always worrying that no one likes me.” Still others describe “I always feel like my anxious twelve-year-old self in social situations.” All of these troubles tend to stem from a similar source: experiences with peers that occurred between the ages of about 8 and 14. These experiences created feelings of shame, embarrassment, and anxiety, to name a few. They often were so fraught with humiliation that they were kept secret from parents or teachers or any adult that might have been able to help.

Dave, a handsome 42 year old, came to see me in therapy when he couldn’t tolerate how anxious he was about meeting women. He explained that he could go to a bar and talk to a woman only if there was a group of women and he was with a friend who would begin the conversation. Then he could chat with a woman he felt attracted to. If she seemed very interested, he would ask for her number. But he told me, “I never call because I know she was just being polite to give me her number. I really can’t imagine that she thinks I’m attractive and wants to go out with me.” Dave had one girlfriend in college. There was one woman he continued to see for 2 years when he was about 35, but he felt he was continuing the relationship just to be in one, not because he was particularly interested in having a relationship with this woman. Now he typically goes on dates a few times a year.

As Dave and I talked in therapy, he began to describe how he came from an Italian family where his mother was a great cook and where food was always the main focus of interest in the family. His mother was overweight, and from the time he was around 8 years old, he began to put on weight and described himself as “chubby.” He said this was never an issue in his family. No one called his weight to his attention. When he was in second grade, he remembered passing by his friend Ray who was whispering with one of the girls in the class. They were both looking at him and giggling. He remembered hearing the word “fat.” This memory and subsequent experiences of being the “fat boy” throughout elementary school and into seventh grade were a significant influence on his picture of himself. When I asked Dave if he ever tried to tell his parents about this and get some help with how devastating these experiences were for him, he told me “My parents wouldn’t understand because they could never see anything wrong with me. I didn’t want to upset them. Besides, I‘m sure they would have laughed and told me I was taking it too seriously.” Sometime in seventh grade, Dave began to lose weight and grow taller. He knew he no longer looked like a “fat boy,” but he continued to feel unattractive and self-conscious, particularly around girls.

Much too often in my therapy practice, a patient comes into treatment with experiences about how the “mean girls” in middle school tortured her. This is an all too familiar story with the typical plot of one girl focusing on another and getting the group to either stop talking to her, spread negative rumors about her, or tease her about some physical attribute. Anne was an attractive, smart young woman of 28. She came into therapy because she felt lonely, depressed, and anxious. She had moved to the city about 18 months before when she took a new job in publishing. She was living with a roommate whom she didn’t know before she moved. Although their relationship was cordial, they hadn’t developed a friendship. Anne, in fact, hadn’t made any friends. She said there were some women at work who she wished she could get to know better, but she felt scared to suggest they go out for coffee or dinner. She saw the women at work as part of a group that she felt she couldn’t break into. She expected rejection. As she told me this, she sighed and said how it reminded her of other experiences. She recalled, “In college I started to become friendly with Liz who shared my interest in poetry, but as soon as Liz started to hang out with a group that was part of the Literary Society, I got scared and withdrew.”

As Anne shared her memories, it became clear that her anxiety and fear of rejection by the group began in middle school. She told me she felt traumatized in seventh grade when her best friend told several mutual friends to stop talking to her. “I couldn’t believe it. It made no sense, and I couldn’t figure out what I had done that they would be so mean to me. I was devastated and horrified at the thought of going to school. I told my parents that I was sick and couldn’t go to school. They believed me for a few days but then insisted I go back to school.”

I asked Anne why she didn’t tell her parents what really happened. She said, “I was so humiliated. I was so scared there was something disgustingly wrong with me but I didn’t know what it was. I couldn’t let anyone find out what it might be. The best I could do was to tell my parents that I had a disagreement with a friend, but they assumed that it was just the usual adolescent behavior. They told me to ignore it and it would get better.” Anne lived in pain and fear when she was at school. It took about a year, and several of the girls started to talk to her again, but Anne could not resume the friendships. She made some superficial relationships with other girls during the seventh and eighth grades. When she moved on to high school, she did make a few new friendships, but she never felt close or let anyone get to know her. She was protecting herself from being rejected and hurt again.

Both Dave and Anne were very attached to the sense of identity that they had developed in relation to their peers. Both expected the same negative responses they had experienced from their peers even though they were now adults. Dave, clearly an attractive man, and Anne, a pretty, smart young woman, were behaving in ways to perpetuate their earlier experiences. As long as Dave did not allow himself to experience how attractive he was to women and as long as Anne continued to view herself as undesirable to women friends, they behaved in ways that created a self-fulfilling prophecy of their expectations.

This article will be continued in Part 2.

Related articles:
Effects of Subtle Peer Group Bullying on Development of the Self, Part 2
Fitting In and the Development of Self
Considering SELF Helps Teens Keep Perspective on Facebook