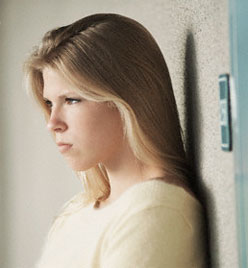 Often a client will call about his or her teenager. Co-dependents usually try to guess at what normal is. Since most of them had pretty chaotic childhoods, they tended to over function and were people pleasers and super-responsible. It is logical for them to expect their children to behave the same way. Co-dependents are normally very aware of themselves as parents, and try to be perfect at it. Although none of us are perfect at anything, usually co-dependents are much better parents than theirs were. Therefore, their children act more like normal children. In our culture, when children feel safe and they trust that their basic needs will be met, they can sometimes be obnoxious. They let out their negative feelings freely, especially with their parents. You may wonder why they don’t appreciate all you have done for them. They have never experienced anything else, so they take it for granted.

Girls around fifteen years can be very difficult sometimes. I know this from having been one and from raising three girls. I have had mothers call about their teenage daughters. When I ask about their problem or concern, the mom may say something like “All she cares about is boys and how she looks and she is angry with me most of the time. Co-dependents often do not realize that those behaviors are often typical in a teenage girl. Of course, just because it is normal does not mean it isn’t irritating. I teach parents some skills for managing this behavior. Angry boys are more likely to distance themselves from their family by being away from home as much as possible. When girls are growing up and beginning the process of separating from their family, they want to stay engaged so they often argue.

Co-dependents can’t believe that their children are so mean and disrespectful. Here they have tried so hard to be good parents and this is how they are repaid. Understanding that this behavior is part of adolescence when children feel loved and safe makes it easier to bear. Of course if the behavior is extreme, or your teenager is getting into trouble, or using drugs, or drinking or failing in school, it is time to get help immediately. If not, you can handle it. Just remember a simple rule of parenting and behavior modification. Remember, that any attention reinforces behavior. So they best way to eliminate the behavior is to ignore it if you can stand it. You might tell your teen that you will be glad to speak to them, when they can be civil. They will try to lure you into an argument by pushing your buttons. Don’t let them. Walk away and refuse to talk to them until they are civil. If you want, you may have a consequence for your teen if they use profanity with you or become emotionally abusive. Think about the consequence first, when you are not angry. Try to make sure that it is enforceable, and if you say there will be one, be sure to follow through. You don’t want to teach them that if they are difficult, that they will get their way.

The last thing that I want to tell co-dependent parents is to be sure to do something to take care of yourself. You can’t take care of anybody else if you are not okay. Dealing with teenagers can be very stressful, so it is importance that you do something to manage your stress. Also, your children learn by your example, and you want to teach them to be good to themselves. Nothing can be better than showing them. My next article will discuss how work issues bring co-dependents to therapy.