Parents of Twins More Likely to Have Anxiety or Depression 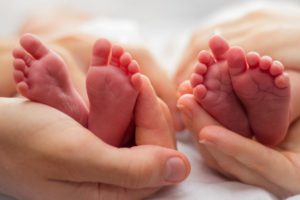 The study included 241 parents of multiples, most of whom (197) were mothers. Researchers recruited parents through a twin listserv, an in-person twin gathering, and a BabyCenter twin forum. Participants completed written questionnaires about their experiences following childbirth. The questionnaires included scientifically validated measures of depression and anxiety.

Parents were more likely to report mental health concerns if they:

Many parents of singletons report less sleep after childbirth. Yet parents can have a particularly hard time managing the schedules of multiple babies. Many parents reported a drop in sleep quality during the first three months after birth. Poor sleep quality was linked to worse depression and anxiety symptoms.

Barriers to Care for Parents of Multiples

Nearly half (48%) of parents said they would have been interested in receiving mental health care either during pregnancy or in the year following birth. Yet less than 10% received mental health treatment during the postpartum year. The study says the most common barrier to seeking care was a lack of time.

Another barrier was a lack of information. Most participants (63%) said no health care provider discussed mental health with them during pregnancy. Previous research suggests many obstetricians feel uncomfortable talking to people about mental health.

This discomfort could prevent parents from getting diagnoses and treatment referrals. Many parents in the study were unprepared for the challenges associated with multiples. The study authors urge providers to do more to address the mental health needs of parents expecting multiples.

Parents experiencing depression or anxiety may find therapy a worthwhile investment of time. Therapy can be a safe place to talk about one’s feelings without judgement.