Parental Influence: Telling Adult Children What to Do 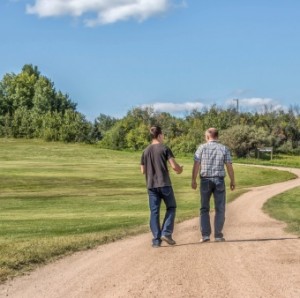 Megan doesn’t want her daughter to be a theater major in college. Tim doesn’t think his son’s about-to-be fiancée is right for him. Samantha doesn’t want her son to join the Peace Corps. Each of these parents struggles with if and/or how to express their strongly felt feelings and opinions to their children. Each believes that there would be disastrous consequences if their child followed through with their choice.

Parents who are troubled and conflicted about what they see as the life choices their adult children are making describe experiencing a wide range of intolerable feelings. Typically feeling desperate, the initial question they present to me is, “How can I get my child to do what I know is best?” When I respond, I try to get them to consider my question: “Best for whom?” Surprised, they usually look at me as if there can only be the obvious answer: “best for my child.” But if I can help them consider how it is also best for them, they may ultimately have a fuller sense of what is driving their strong need to influence their child. It may also help them moderate their intense and frequently painful feelings. They will then be in a better position to choose how or if they should try and persuade their child to see it their way.

I am going to describe some work I did with Megan, who responded “best for my daughter” to my usual question.

Megan was open to exploring both why she thought it was best for her daughter and also why it might be best for her. She described how worried she was that her daughter, Annie, would never make it in theater: “She is going to suffer all the pain and humiliation of failure. I’m really frightened that she’ll never be able to make a living. She could end up living a terribly depressed and deprived life.”

As Megan and I talked about her worries, she acknowledged that she would be relieved if Megan didn’t become a theater arts major. She recognized that she was very frightened. If she could influence Annie, her suffering would diminish and she would feel much less anxious and troubled.

As we explored Megan’s feelings, it was clear that while she understood that she wanted to get rid of her anxiety by persuading Annie to listen to her, she had complete certainty that her daughter’s life would be ruined: “She says she gets it, but I don’t really think she has thought about what it will be like to fail, to not be able to support herself after college.” This has created a serious conflict between mother and daughter. Megan was so sure it would be a disastrous decision that she wasn’t willing to pay Annie’s college tuition.

Megan and I did a lot of talking about her relationship with Annie. Megan was surprised at how much Annie was pushing back: “She’s always listened to me. She never fought with me about anything. We’ve had very few disagreements. I remember when I told her that I thought her friend Jordy, who I never liked, was a bad influence. She didn’t argue and just stopped hanging out with her. She took tennis lessons and talked about how much she liked the game. But I could see that she was pretty bad at it and she never objected when I suggested it wasn’t her thing. I don’t know, she’s always seemed fine with my ideas about what was good for her and what wasn’t.”

The more I learned about Megan and Annie’s relationship, the more it seemed that historically there was a dynamic where Megan exerted a great deal of influence and Annie complied. I wondered if there was some significance in Annie turning 18 and planning to go away to school that created a shift in this pattern. Annie was behaving in a more separate way from Megan. She was expressing more of an individuated self. Perhaps Annie’s new attempt at separation and individuation was something Megan was finding difficult.

As we continued our work, Megan began to consider that she was having trouble separating from Annie. One day in our session she began to cry: “You know, I suppose it’s always been about separation. I thought if she did what I wanted, followed my life plan for her, didn’t have conflict with me, we would always be Mommy and Annie. But she is growing up and she isn’t just like me. Maybe she is tougher than me. I get scared about risks. I suppose it might not be so terrible if she was less scared, more able to risk failure. I don’t know. The thing is, I don’t like her choice. I think it’s wrong. I don’t want to help her to do it.”

Megan’s tearful statement captures her intense conflict. Her strong need to stop Annie from becoming a theater arts major may not just be about her intense belief that it is a choice that would be harmful to Annie. The surprising pushback from Annie may have strengthened Megan’s feelings that the theatre choice is a bad one.

Megan has reported that Annie has become very angry with her and has told her that she is going to find a way to pay her own tuition. Megan, in disbelief, told me: “This is so not like her. She says I can’t stop her from doing what she wants for herself. She screamed at me, ‘I’m not going to let you make me doubt myself or make me feel guilty for choosing what I want instead of what you want.’ I can’t believe this is my daughter talking to me.”

Megan is feeling hurt and rejected by Annie. Until now, Annie had not had her own voice in their relationship, and it is difficult for Megan to see Annie’s assertion of herself as a positive behavior in service of the developmental tasks of separation and individuation. As we have been exploring her conflict, I have asked Megan to think about her impact on Annie. Megan has been so angry and scared about Annie’s choice that she hadn’t stopped to think what it would feel like for Annie to be unsupported: “I guess she could feel like I don’t believe in her talent or that she doesn’t have what it takes to succeed. But maybe she’ll think she has a mother who is trying to make sure she doesn’t do something ruinous.”

Megan and Annie’s struggles are representative of parent-child conflicts where parent and child feel strongly about influencing and being influenced. These conflicts are often not simply about the manifest issues at hand. Rather, both parent and child are responding to the indirect messages in the communications. To deal with these conflicts, it is important for parents and children to learn how to express the impact each is having on the other.

Parents may feel they are being protective parents who are taking good care of their children when they insist their adult child do it their way. They can feel angry, hurt, or confused by their child’s responses to their concerns. Adult children frequently report feeling intruded upon, infantilized, and/or controlled when parents attempt to have the final say in their life decisions. These children may begin to doubt themselves and can become anxious about failure. Or, they may become angry and recognize they are being deprived of learning how to become resilient and deal with failure. Many express that their self-confidence is being undermined.

When parents try to influence their children, it is important for everyone to decode what messages are being communicated and whether the intended communication is what is being heard. While parents may believe they are expressing “I love you and want to protect you,” or, “I am thinking about what is best for you,” their child may be hearing, “you don’t have what it takes to do that,” or, “you don’t know how to take care of yourself in risky situations,” or, “you are going to fail and not recover.” When the child rejects the parents’ influence, parents may hear the child’s response as, “I don’t love you”, “you don’t know me,” or, “I want to get away from you.”

Megan is working on taking Annie’s angry outbursts less personally and is trying to be more aware of the benefits for Annie in being supported by her. For now, Megan’s goal is to get comfortable with the idea of having a dialogue where she is open to hearing what Annie has to say about what she wants with the hope that Annie will be more willing to consider the risks and potential harm that could result from her choice of major. Megan also wants to try to have a conversation with Annie about their relationship and what it is like for both of them to deal with Annie’s separating and individuating.

As Megan has discovered, parents and their adult children who are struggling about whose version of the adult child’s life will prevail need to find a way to talk, listen, and hear each other. If they can accomplish this, they will be in a better position to benefit from the other’s views and have a better chance of accepting each other’s differing points of view without feeling dismissed and devalued. While this doesn’t mean they will agree, the unwanted and painful feelings that are generated in the struggle can become more tolerable, and the relationship will be stronger.