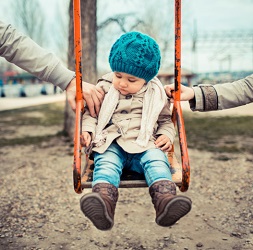 When parents divorce they are faced with the need to continue a relationship that has not worked.

For some this is not a difficult transition. They set up separate households, work out a parenting plan, communicate efficiently about the needs of the children, and, while co-parenting, move on to whatever comes next in their lives.

Others experience rancor towards each other, argue about decisions regarding the children (including those they disagreed on in the marriage), carry the hurt feelings and blame into each discussion, and have to work to keep their conflict out of the children’s reach. With some effort and some help, they manage to minimize these problems.

Then there are parents who cannot abide the presence of the other. Being near each other is often emotionally and physically upsetting. They act out in front of the children and appear to have little control over their interactions with one another. The children are exposed to a level of conflict that can be loud and frightening or quiet (deadly silence) and disturbing.

What Is Parallel Parenting?

The courts involved with these families have struggled for years to devise ways to allow children to keep a relationship with both parents without being exposed to their negative dynamics. Parallel parenting, a term taken from child psychology literature, has emerged as the outgrowth of that effort. You may have noticed that toddlers do well playing in the same room, perhaps in the same sandbox, as long as they play separately. They do not share toys easily and have no ability to negotiate their desires or control their emotions. The parents steered in the direction of parallel parenting exhibit many of the same behaviors. Most often, each parent has sufficient ability to independently raise their children. The problems occur when they try to make decisions together, manage schedules, allow flexibility, or try to negotiate their differences.

Parallel parenting has developed over the past 10 years because there is a strong belief in many courtrooms that, for the most part, children should have a relationship with each of their parents without being caught in the middle of the parental conflict. Courtrooms also believe each parent has a right to have a relationship with their children that is unimpeded by the other parent.

The single indicator for children not doing well after a divorce is the level of conflict to which they are exposed. They can be exposed to conflict whether or not their parents are loud and angry. They are exposed to conflict when they experience their parent’s tension and inability to co-parent by making the necessary decisions on behalf of their children. Children often feel they are the reason for the divorce and the tension. If they hadn’t wanted something or said something or did something wrong, Mom and Dad would not be so unhappy or angry with each other and might still be together.

Both parents make decisions about their children for the time they are in their care. They often work with a Parenting Coordinator (called “Special Master” in California) to close loopholes where differences can occur. The intent is to help the parties avoid trying to control how the other person parents and to reduce the need to make decisions together. This includes bedtimes, food, clothing, friends, activities, etc. For major decisions, each parent may have an area for which they are primarily responsible. For example, one parent will make medical decisions while another will make educational decisions. They will then inform the other parent of the decision that has been made. In an emergency, parents will communicate whatever is necessary; however, for the most part, they avoid face-to-face contact. Communication is through email or another medium and the pick-up and drop-off of the children is at school or daycare or in the presence of a third party. Their parenting plan is specific, leaving no room for misunderstandings. The pick-up and drop-off times are detailed as well as who is responsible for transportation at each exchange.

The above description gives an overview of parallel parenting. While this is often the only way to minimize the conflict to which children are exposed, it is certainly not without its problems.

• Children with parents who parallel parent may have difficulty containing their own feelings when they are in disagreement with someone they are in a close relationship with. They have not had this behavior modeled for them and may not have a sense of what it is like to modulate and negotiate without feeling personally attacked.

• The parenting styles may be of such a different nature that going back and forth between parents may feel like living in two different cultures. Children do have an amazing ability to adapt to change, however, there is little in the literature addressing the outcomes for those who grow up with big differences, such as what clothing they are permitted to wear, the friends they can have, the religion they must adhere to, or the foods they are permitted to eat. And it may be confusing to them to know which rules they may break in each household. Depending on the child’s age, there may be more confusion when the child is too young to ask the appropriate questions.

• Loyalty issues are very important to children. They have to learn to navigate between the two households while trying to be fair and not feel disloyal to Dad for doing something at Mom’s house that is not allowed at Dad’s house. It may bring up the question, at too early an age, as to what makes something wrong when it is okay in one place and not in the other.

• Parents tend to have incomplete pictures of their children due to not getting caught up on what has happened when the children are with the other parent. They might miss out on first steps for infants, the first day of school, problems a child only tells the other parent about, or losses a child might experience of a relation. Holes in communication do not get filled. Perhaps there is a last-minute team practice, play rehearsal, or game that only the other parent was notified about.