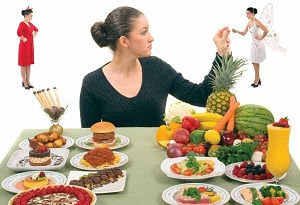 Last week, I had the privilege of presenting a web conference on disordered eating for Good Therapy. In the course of the web conference, I was asked a question about orthorexia. Thinking about what to write for this month’s article, this Q&A exchange about orthorexia popped into my head. I realized I’d not done more than mention it in passing in my Good Therapy articles, and thought I’d take this opportunity to explore the subject.

Orthorexia is not an “official” eating disorder, that is, it’s not mentioned in the Diagnostic and Statistical Manual of Mental Disorders (commonly known as the DSM). But it’s something that has become common and concerning enough that in 1996, practitioner of dietary medicine and author of “Junk Food Junkies” Steven Bratman, M.D., took notice and coined the term “orthorexia nervosa,” in his words, “to denote an unhealthy obsession with healthy eating.” His website devoted to orthorexia is the aptly-named orthorexia.com.

Bratman derived the term from the Greek “ortho,” meaning “right” or “correct.” Orthorexia can begin as a sincere desire to improve the quality of one’s diet, in much the same way that someone who develops anorexia or bulimia nervosa can start out by going on a diet to lose a little weight.  It progresses by a narrowing of the allowable types of foods, or the increase in types of foods deemed not healthful enough, so that the number of allowable types of foods decreases until the range of foods is very small.  For example, a person may decide to cut back on red meat, then eliminate it, then decide to become a vegetarian, then vegan, then a raw vegan, eating only raw plant-based foods. There is nothing inherently wrong with any of these types of diets: what distinguishes orthorexia from a healthful way of eating is the “unhealthy obsession” aspect.

Orthorexia involves preoccupation so strong that it becomes obession: a sufferer’s thoughts become focused on food, and his/her day comes to revolve around procuring and preparing food to the exclusion of other important activities and aspects of life. An orthorexic person may lose interest in hobbies or leisure activities, as his/her obsession with “healthy” eating increases. It can interfere with relationships: the inability to go out to share meals with friends and family at restaurants, to participate in social events where food is served, or to partake of and enjoy family dinners.

Merriam-Webster defines “obsession” as: “a persistent disturbing preoccupation with an often unreasonable idea or feeling.”  People with orthorexia, similarly to those who have anorexia nervosa, usually don’t experience their preoccupation to be “disturbing,” nor do they recognize it to be “unreasonable.” And this makes orthorexia, like anorexia, very difficult to overcome. Our culture values qualities like purity, self-discipline and control. Orthorexia, like most all eating disorders, involves ways of thinking that embrace these values as well. This allows eating disorders to camouflage themselves against our cultural backdrop, and supports the aspects of disordered eating that are ego-syntonic, that is to say, matching up with a person’s positive perception of his or her self. (Aspects of disordered eating that are ego-dystonic, such as overeating and inducing vomiting, are much more likely to feel “disturbing,” which often what motivates a person to get help.)

Orthorexia is sometimes present as part of, or along with, other eating disorders. I have worked with clients who’ve told me that as long as they adhere to their raw vegan diet, they have no problem with binge eating. The flip side of this is that if they deviate from their raw vegan diet, they binge, so they believe that the raw vegan diet is the solution to their binge eating disorder, rather than recognizing both as part of their eating disorder. I’ve worked with anorexic clients who have very orthorexic attitudes about food, wanting to eat (a narrow range of) only “healthy” foods, unable to recognize that eating habits that result in medical problems due to inadequate weight and food intake is anything but healthy.

Like any form of disordered eating, the way to “undo” orthorexia is to obtain proper psychotherapeutic help, so that the underlying issues driving the disordered attitudes about food and eating can be addressed and resolved. A person with orthorexia often struggles with accepting the parts of themselves that have qualities they don’t like. Banishing “unhealthy” foods is often a means of rejecting aspects of themselves that they think of as bad. True health means accepting ourselves entirely, including the parts of ourselves that have qualities we don’t like. Because to be human means to be complex and imperfect, and to be healthy humans means to regard ourselves with compassion and acceptance, just as we are.