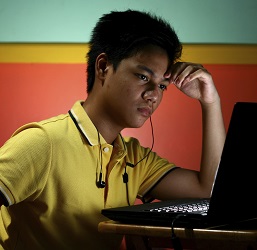 Bullying doesn’t need to happen in person to create a culture of fear and vulnerability. A new study from Sam Houston State University has found that students who experience cyberbullying are more likely to fear being bullied at school.

According to the study, about 7% of students experienced cyberbullying, and 29% experienced traditional bullying. The study surveyed 3,500 American students between the ages of 12 and 18 about their experiences with and feelings about bullying and cyberbullying. Victims of traditional bullying expressed the most fear about going to school, probably because in-school bullying is a foregone conclusion for this group. Cyberbullying victims, though, also explained that they were afraid of going to school. The aggression and hostility they experienced online made them anxious about potential in-person bullying at school. Minority students, as well as those who feared gang activity at school, experienced the most fear after being cyberbullied.

The Psychological Effects of Bullying

Parents once told children to fight back against bullying or to ignore the abuse. The latest study is just one in a long line of research emphasizing the dangers of bullying. We now know that bullying yields serious negative consequences, including:

Schools with bullying problems are more likely to have students who dislike or fear school. Students at these schools experience fear and insecurity, and report that teachers don’t care about them.