One Important Question That Can Get You and Your Partner Talking 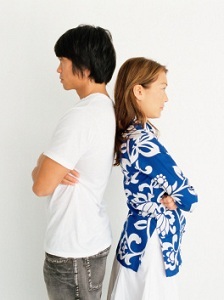 Consider Fiona and Carter. Carter never hangs up the towels he uses in the bathroom, and Fiona hates towels being left on the floor. She tried a number of strategies such as ignoring the towel (it got moldy because Carter didn’t notice it), hanging it up herself (she got resentful that he was being disrespectful to her by not picking up after himself), or asking Carter to pick it up (he did for a couple days and then forgot about it). She was frustrated that Carter didn’t seem to care about what she wanted and he was annoyed that Fiona was making such a big deal out of a towel.

I put the all-important question to her: Is this an issue between the two of you, or is this a problem of needs not getting met? She wasn’t sure.

You may not be sure as you are faced with disagreements with your partner, either. Here are four more questions that can help you sort it out.

Fiona talked about how her parents (both alcoholics) have never kept a clean or organized home. As a child, she had been embarrassed and ashamed to bring friends home. She vowed to herself that when she had a home of her own, it would be different. She wouldn’t have to live in a chaotic and disordered household. While she realized that a towel on the floor didn’t equate to chaos, she also knew that when she saw that towel on the floor, she again experienced the anxiety and shame of her past.

I prompted Fiona to talk about unmet needs and encouraged Carter to keep an open mind. Her unmet need was to be sure that she lived in a predictable, stable, and clean home. When she spoke about the towels this way, he was able to understand that she was not being critical of him but she was trying to create a stable environment for herself. He was able to be more considerate of her feelings and to sincerely assure her that he cared about her and her needs. He reminded her that they in fact did have a predictable and stable home even though his towels were sometimes on the floor.

Actually, the question of issues versus unmet needs is a trick question. Most disagreements come about because of unfulfilled needs. It can be hard to admit that you have needs, and even harder to risk telling your partner. Here’s the good news: if you talk about the problem in terms of your needs, your partner will be more accepting and open than if you approach the problem as if your mate has done something wrong—and you are more likely to get your needs met.

© Copyright 2010 by By Pamela Lipe, MS, therapist in Saint Paul, Minnesota. All Rights Reserved. Permission to publish granted to GoodTherapy.org.