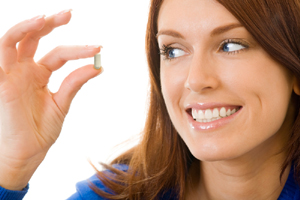 By now, most people have at least heard of Omega-3 fatty acids, which are commonly found in fish but are also in flaxseeds, walnuts, and products like eggs from hens who have consumed an Omega-3 rich diet. Omega-3s are polyunsaturated fats that are also essential nutrients – this means that our bodies cannot produce them on our own, and we thus need to obtain them from dietary sources. Omega-3s are often described in terms of EPA (eicosapentaenoic acid) and DHA (docosahexaenoic acid), and you may see these descriptors on fortified foods or supplements containing them. DHA is believed to play a role in the brain’s structure. EPA and EPA plus DHA supplementation have been associated with decreased inflammation and improved mood.

You may also have heard of Omega-6 fatty acids. These too are essential nutrients; however, most Americans consume far more of these than Omega-3s, because Omega-6s are found in vegetables oils, among other foods. Many of the processed foods that we consume contain plenty of Omega-6s, such as soybean, safflower, sunflower, cottonseed, and corn oils. Most of us wind up having too much of the latter foods, unfortunately.

The Right Ratio is Important

Consuming too many Omega-6s and too few Omega-3s is associated with a variety of health problems. The research to date has revealed a link between a high ratio of Omega-6s to Omega-3s with cardiovascular disease, major depression, increased risk of suicide attempts in patients who are depressed, as well as chronic inflammation. Conversely, diets high in fish consumption (Omega-3s) have been linked to reduced risk of the above conditions in large population studies.

Omega-3s and Mental Health: The Data

These findings have prompted a number of clinical trials examining the potential benefits of supplementation with Omega-3s. With regard to mental health, in several studies, Omega-3 supplementation has been associated with improvement in depressive symptoms, and in one study, improved symptoms of depression in patients who were diagnosed with bipolar disorder. Furthermore, in a small trial of depressed children aged 6-12, Omega-3 supplementation (where the ratio of EPA to DHA was 2:1) was associated with a marked reduction in depression scores as compared to receiving a placebo.

A particularly interesting group of findings came out of a small 2003 study of patients who met diagnostic criteria for borderline personality disorder. Borderline personality is often marked by impulsive aggression and reactive mood swings, which do not always respond sufficiently to treatment with antidepressants or mood stabilizers. In this study, participants were provided with either a 1000 mg daily dose of 97% EPA or a placebo containing mineral oil. At the end of the 8-week trial, EPA supplementation was associated with significantly decreased severity of depressive symptoms and reduced aggression as compared to placebo.

Finally, a very recent study examined whether daily supplementation comprised of 2085 mg of EPA and 348 mg of DHA supplementation could reduce anxiety in healthy medical students who did not meet criteria for an anxiety disorder but nonetheless experienced periodic symptoms. The researchers found that anxiety symptoms were 20% lower in those who took the Omega-3s, and that these participants also had lower levels of inflammation as measured by blood samples. There were no differences in levels of depression between the two groups.

It is important to note that more research needs to be done before Omega-3 supplementation can be recommended as a stand-alone treatment for psychological symptoms. Yet, there is evidence to suggest that increasing intake of Omega-3s could be helpful for managing mood symptoms as well as to maintain cardiovascular and overall health.

The easiest and safest way to improve the Omega-3 to Omega-6 ratio is to increase the amount of Omega-3-rich foods consumed, such as fresh seafood, walnuts, flaxseeds, and fortified eggs, and decrease Omega-6-laden choices such as processed foods and packaged baked goods. Give yourself at least several weeks to a few months to notice a difference. If you are considering taking Omega-3 supplements, it’s a good idea to speak with your doctor or a registered dietician to determine an appropriate dose, or whether there are any contraindications for you.

Finally, if you have symptoms of depression or other mental or physical health issues, be sure to see a qualified professional to explore all appropriate treatment options.

This website has information about Omega-3s and other CAM topics for consumers and health professionals: http://nccam.nih.gov/health/omega3/

Information to help you include lower-mercury fish options in your diet: http://www.fda.gov/food/foodsafety/product-specificinformation/seafood/foodbornepathogenscontaminants/methylmercury/ucm115644.htm