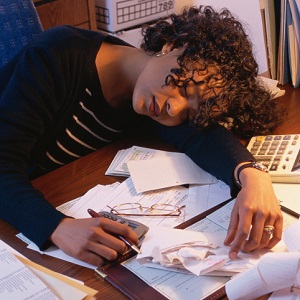 Had enough of the 40-hour (or more) work week? So have many other people. Earlier this week, The New York Times selected a handful of editorial-style articles on the subject for an online spread in “The Opinion Pages” that explores the issue of long hours on the job and how this impacts quality of life.

In an essay titled “An American Dream Deferred,” Lynn Stuart Parramore, director of the New Economic Dialogue Project at Alternet, details how the current work expectations of U.S. companies contradict the visions and hopes of our country’s founders and thought leaders, such as John Adams and Thomas Jefferson. As she writes, Adams envisioned a society that allowed his children and grandchildren the time and space to read poetry and enjoy music—not be stuck in an office cubicle or service job for hours on end. Jefferson wrote extensively on the pursuit of personal happiness, and how all Americans should be afforded this right.

To counter the trend toward an increasingly industrialized, mechanized experience of life in the United States, some are pushing for more flexible hours or to reduce the work week to 30 hours; in her essay on the subject, Anna Coote, head of social policy at the New Economics Foundation in London, argues that fewer hours spent on the job means better health and more time to enjoy other things in life, like time at home bonding with family and doing hobbies. She proposes higher wages to account for the decrease in hours paid.

Others, like Dharmesh Shah, the co-founder and chief technology officer at a marketing software company in Massachusetts, claim a rigidly defined work schedule actually decreases productivity and overall business success. People don’t want to feel as though they are chained to their desks, unable to move through life in a way that feels natural and healthy; and when their needs aren’t being met, employees tend to slack and produce shoddier work in general.

In other mental health news…

Self-Acceptance Could Be the Key to a Happier Life, Yet It’s the Happy Habit Many People Practice the Least

Studies show that accepting ourselves just as we are—flaws and imperfections as well as the good stuff—is a practice that breeds personal happiness, but apparently the call to ‘love thyself’ is easier said than done, as many people still do not focus their time and energy on cultivating it.

New research from Vanderbilt University identified cannabinoid receptors in the central nucleus of the amygdala, which is largely responsible for processing emotions and regulating anxiety levels, in studies involving mice. This explains the cannabis plant’s anxiety-relieving effects, and reveals the reason why some might find the habit of using marijuana to be addictive; since there is a naturally occurring endocannabinoid system in place to regulate anxiety levels, over time, using a substance to activate this system decreases the functionality of these receptors, thereby making a person dependent on the plant to remain calm.

Meditation among prisoners is having profoundly positive effects, particularly transcendental meditation. Through the help of organizations like the Prison Mindfulness Institute and the David Lynch Foundation, meditative practice is being introduced and explored in a number of prisons across the country.

For decades, there has been a ban on allowing transgender individuals to serve in the military; however, it has been determined recently that there is no medically based justification for this ban, and there is now a push for President Obama to issue an executive order to lift it.

The pressure to look a certain way and maintain a certain size and shape has long been focused on women, and young girls, especially. A new study reveals, however, that adolescent boys are feeling increasingly aware of and obsessed with their body image, as well.

Report Says Medication Use Is Rising for Adults with Attention Disorder

Along with increased diagnoses of conditions like attention deficit hyperactivity (ADHD), the use of psychotropic medications is also on the rise in the United States, particularly among children, adolescents, and young adults.

Adam Lanza’s Father in 1st Interview: He Would Have Killed Me ‘In a Heartbeat’

In December 2012, Adam Lanza, a 20-year-old who had been diagnosed with Asperger’s, killed his mother and then fatally shot 20 children, six staff members, and took his own life at Sandy Hook Elementary School in Newtown, Connecticut. Now, his father speaks out about his son’s instability in an interview with CNN.

Feel-Good Story of the Week: Autistic Kids Soar in Unique Partnership with Theater

An alternative school in Seattle, Washington, is making a huge difference in the lives of children who have been diagnosed with autism, which now affects 1 in 88 children.  After noticing that the autistic students were naturally drawn to music, “Broadway Bound,” a children’s theater group that shares building space with the school, decided to allow them to audition for and participate in musicals.