More Than a Pet: The Role of Working Dogs in Mental Health 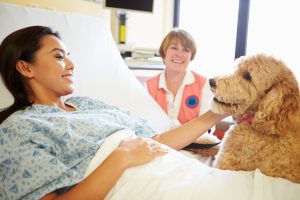 There are a lot of misconceptions regarding working dogs: psychiatric service dogs, therapy dogs, and emotional support dogs. They all help people with mental health issues, but they also have different roles, responsibilities, and rights under the law.

Each country has different laws and regulations regarding working dogs. The examples used in this article are based in the United States, where federal laws regulate service animals. Regulations and definitions of service animals can vary even by city or province within a particular country, so check the laws in your area for specifics.

Each of the following stories represents a service team (a dog and his or her handler).

Lola and Isaac are quite the pair. Lola is Isaac’s psychiatric service dog (PSD). They are nearly always together, seemingly inseparable. Lola is allowed to go into buildings and areas most dogs aren’t allowed, such as restaurants and stores.

When Lola is wearing her vest and “on duty,” she pays attention only to Isaac. No one else is allowed to talk to or pet her. She can also be on duty without her vest, but Isaac puts it on her because it helps businesses identify that Lola is a service dog and is legally allowed to go into places a regular pet dog can’t.

Isaac takes some pretty heavy medications that help combat his hallucinations, and sometimes they don’t work. Sometimes, in his mind, he sees someone trying to kill him, and he will yell and scream at the person to go away. When this happens, Lola knows what he is seeing is not real; there is no other person. She’ll go to where he’s yelling. Isaac can then understand what he is seeing and hearing is a hallucination, and this helps calm him down.

Like any other animal, Lola also provides comfort, unconditional love, a sense of security, and makes Isaac feel less alone. But as a service dog, Lola spent over a year and a half in intensive training, learning how to help mitigate Isaac’s posttraumatic stress. Thousands of dollars were paid for her training, but to Isaac she is priceless. Because of her, he can be out in the community without fear he will get lost during a dissociative episode. She is, in many ways, a lifeline.

Frank is a 25-pound, mixed-breed dog adopted from a shelter by Alex. Frank looks part lab, a bit of beagle, maybe some terrier? No one really knows, but he has a great, laid-back personality.

Three times a week, Frank goes to the local hospital with Alex. When patients ask, Frank will hop up on their beds for a quick pet or snuggle. He’s a calming presence. Being hospitalized can be stressful, and Frank helps patients feel at ease and brings a smile to their faces. He’s been trained to be comfortable with the sounds, smells, and noises of the hospital. He moves quickly and safely around equipment such as IV poles and wheelchairs.

Frank is a therapy dog. Therapy dogs are trained to help people in hospitals, nursing homes, hospices, counseling centers, and many other places where people are stressed or lonely. He doesn’t accompany Alex any other place except for those where he works.

Toby lives with Anna. He’s a greyhound, and a fantastic dog. When Anna is experiencing depression, Toby comes over, licks her face, and rests at her feet. When she pets him, she feels comforted and not so alone. She can’t imagine life without him.

When Anna moved from her mom’s house to an apartment, she was able to bring Toby with her even though her landlord doesn’t allow pets. Anna has a note from her doctor that states Toby is an emotional support dog and helps Anna manage her depressive episodes.

When Anna flew from her home in Los Angeles to visit a friend in Ohio, Toby was allowed to go with her because she had a note from her doctor, but she made sure he was well-trained and would not urinate or defecate in inappropriate places, bark, or behave aggressively toward people or other dogs he encounters.

If you have a mental health issue that might be helped by a working animal, talk to a therapist or consult your doctor. Do some research on laws related to working dogs where you live.

Whether working or simply as pets, dogs provide a unique comfort and sense of unconditional support. In many cases they also provide fur all over the carpet, furniture, and clothing; bark at inopportune moments; sniff guests’ butts; and chew shoes—but we will leave those concerns for another time.