How to Avoid the “Fast-track” from Kitchen to Divorce Court 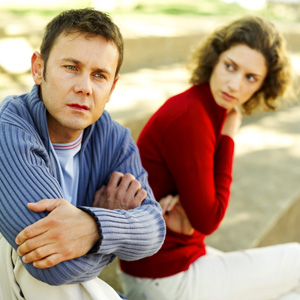 Here’s a story related recently by one of my clients that shows how a couple’s simple conversation escalated into a shouting match that threatened to lead someone straight to a divorce lawyer’s office. See if you can relate to what’s being said.

The setting is the couple’s kitchen. Both have come home exhausted from the workday and from other life stressors. Partner 1 has cooked dinner and Partner 2 has taken out the trash. They sit down and proceed to eat, mostly in silence. As dinner is concluded, Partner 2 clears the table and Partner 1 proceeds to do the dishes and clean the sink.  Noticing a pan with the slightly scorched bottom that she had set aside for special cleaning, she runs hot water from the faucet and pours in a quarter cup of bleach into it, and then leaves the pan in the sink to soak.

In comes Partner 1 with a dessert dish.  Leaning down to place it in the sink, P1 begins sniffing.

(The pitch and volume of the voices are rising now.)

P2:       Oh, so now we’re going to dig up ancient history? Exactly how long ago was it that I did this?
P1:       Why do you have to get so defensive? All I’m asking is that you warn me when you’re going to put bleach in the sink.
P2:       I should think you would have been able to smell it! Why am I expected to warn you of the bloody obvious?

P1:       You just don’t want to admit that you were wrong! I don’t see why I should have to risk getting my clothes ruined simply because you don’t inform me when you are using bleach when you clean!
P2:       (Crying hysterically now) Well, if you don’t love me anymore, then maybe we should just get a divorce! (She storms out of the kitchen and into the couple’s bedroom, slamming the door behind her.)

Wait a minute: what just happened? Was this argument really about bleach, or was it about something entirely different and much more deeply rooted? How did this simple conversational opportunity escalate so rapidly and how could this escalation have been prevented?

Of course, the conversation was about more than bleach. It escalated because neither member of this conversational dyad was consciously aware of the true message behind what each was saying. Tuning in and being mindful of their emotional states prior to and during the interchange could have not only prevented the encounter’s stormy ending but could also have allowed each member of the dyad the opportunity to express feelings, seek reassurance, and get their emotional needs met, instead of ending the evening in a cold silence.

I don’t think it does the term any injustice to say that mindfulness is simply about being aware of what is, here and now, in the present moment, and having acceptance of that awareness. That having been said, of course, the key to mindfulness is the ability to slow down and give ourselves time to become cognizant and aware in the first place. Then, having developed that ability, it is incumbent on us to accept what we notice about how we are feeling and what we are thinking. Acceptance does not require that we like what we are noticing: it simply means we acknowledge that our observations, thoughts and feelings are what they are.

As related to conversational interchanges, the final step for the speaker is to express what is being felt, and for the listener to unconditionally accept what is being said, not because it represents the absolute truth but because it is a genuine expression of feeling on the part of the speaker. In other words, don’t take things personally. If our partner has expressed hurt, express compassion for that hurt. “I’m sorry you feel that way.  I didn’t mean for you to be hurt.” And, invite your partner to elaborate. “Tell me more about that. I’d like to help if I can.”

Now, imagine our couple at the kitchen sink.  Here’s an instant re-take.

P1:       I think I smell bleach in the sink.  Am I right?
P2:       That’s right.  One of the pans got a little scorched.
P1:       (Aware of feeling annoyed)  I wish you would have told me before I reached my hand in the sink that there was bleach in the pan. I’m feeling really tired and I don’t want to have to guess about these things.
P2:       (Also aware of feeling annoyed)  You know, I’m feeling really tired, too.  I just want to get these dishes done.  I didn’t mean to not tell you about the bleach.  I just assumed you smelled it.
P1:       (Stopping to think for a moment) You’re probably right – I could have smelled it.
P2:       I understand that we’re both tired. When you asked me that question, though, I felt as though you were criticizing me.
P1:       I’m sorry. I didn’t intend to criticize you. I sometimes feel discounted, though, when you don’t tell me things I think I need to know. It was as though you didn’t think this was important. I could have gotten bleach on my shirt sleeve cuff.
P2:       I’m sorry, too. It sounds like you felt I was careless and wasn’t concerned about you. That couldn’t be farther from the truth. I think you know that.
P1:       I actually do. You know, we should just forget the dishes, sit down, and relax for a while. Then we can talk about what our day was like. Mine was really frustrating, and I bet yours was, too.
P2:       That’s the understatement of the century! (Laughs) Let’s go.

(They exit, and the curtain falls.)

Farfetched, you may say? Here’s a confession: Partner 2 in this vignette was not really a client. It was your writer. Fortunately, I learned a great deal from this interchange, the main point being that mindfulness, like any skills, must be practiced and not taken for granted!

Mindfulness and compassion can also help you and your partner resolve conflict more effectively, deepening and enriching your relationship in the process. So, slow down. Become aware. Accept. Express. Resolve. Move on. And, by all means, before calling the lawyers, be sure to call a relationship counselor who may be able to help you resolve your communication problems. Being a former family lawyer myself, I’d much rather see you in my counseling room than in the courtroom!

Mindfulness: Finding Peace in the Midst of a Storm
Reclaiming Pollyanna
Putting on a “Happy Face” in Your Relationship