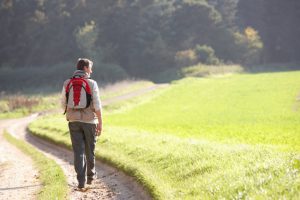 Both internally and externally, those with symptoms of mental health conditions can find stigma impacting their lives and, in many cases, hindering progress by discouraging treatment through avoidance or marginalization. Often these reactions are based in fear and rooted in false information.

The Impact of Mental Health Stigma

According to the Association for Psychological Science (APS), 59.6% of individuals with a mental health condition reported receiving treatment in 2011. While this percentage has improved over the last few decades, it still means only a little more than half of individuals with a mental health condition receive adequate treatment. Stigma is often reported as a factor among those who avoid or refuse treatment. This avoidance affects not only those exhibiting symptoms for more serious conditions like borderline personality, but also those with more common symptoms such as anxiety or depression. 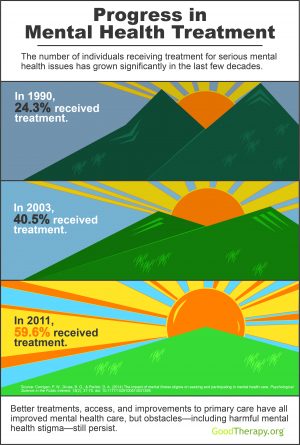 The false perception that mental health conditions contribute to crime, violence, unpredictability, or hopelessness also frequently persist among family members, coworkers, and even within the health care industry. The APS found these beliefs often lead to “active discrimination,” such as excluding an individual from housing, employment, or social circles.

At a time when suicide is a leading cause of death in the world, those with mental health symptoms may never reach out for help. Experts estimate about 20% of the United States population may be experiencing a mental health condition at any given time, and if 40% of those people do not seek treatment, that percentage translates into tens of millions of people in the U.S. living with conditions that can affect their quality of life.

Since 1949, the month of May has been known as National Mental Health Awareness Month. This observance encourages increased awareness of mental health conditions in an effort to overcome persisting stigma that has contributed to a gap in people who experience symptoms and those who seek treatment. According to President Barack Obama’s proclamation for Mental Health Awareness Month 2016, about 44 million American adults experience a mental health condition each year. His most recent budget proposal includes a $500 million investment in mental health care in an effort to improve access to treatment and to make sure behavioral health care systems are effective for those who need them.

The Pervasiveness of Mental Health Stigma

A study in the journal World Psychiatry describes those with serious mental health conditions as being “challenged doubly”—dealing with both their condition and its symptoms, but also often robbed of opportunity by way of stigma. The report acknowledges these views are not limited to the general population; many trained mental health professionals may hold the same views and stereotypes.

Stigma can reach into many corners of a person’s life. Some of the primary areas where complications arise include:

This type of stigma comes when members of the general population give in to stereotyping, and subsequently discriminate against someone perceived to have a mental “illness.”

Pervasive stereotypes against those with mental health conditions or symptoms may lead to prejudice against those individuals, denying them social involvement, good jobs, or safe housing, among other opportunities that affect quality of life.

In the workplace, an individual might fear being discriminated against in their profession because of a mental health condition. Even in the health care industry, promotions and job placements are commonly denied to those thought to have a mental health condition. Many individuals with symptoms may even be blocked during the initial interview process.

According to a report by the Organisation for Economic Co-operation and Development—an organization dedicated to promoting policies it believes will improve the economic and social well-being of people worldwide—people with mild-to-moderate mental health conditions in the U.S. are two to three times more likely to be unemployed than those without a mental health condition, while those with severe conditions are six to seven times more likely.

Beyond the outward difficulties associated with being stigmatized, some people may start to believe the same stereotypes and begin to stigmatize themselves. People experiencing self-stigma may begin to internalize these stereotypes and see themselves as incompetent, hopeless, or weak, which may prevent efforts toward seeking or receiving adequate treatment.

How to Make a Real Difference

Learn about the issues. People can improve the situation by becoming better educated and aware of mental health issues. Being familiar with what a family member or friend with symptoms is experiencing may be a good first step. Learning to appreciate the complications of their symptoms and how stigma might impact their treatment is also encouraged by those who have studied the landscape. Improving the general attitudes toward mental health conditions can boost the likelihood that more people will feel comfortable with seeking treatment.

See the person, not the symptoms. With mental health conditions, language matters. Try to identify people as separate from their condition. Rather than referring to someone as depressed, it is more productive to see the person experiencing depression.

It can be difficult for individuals to overcome feeling predisposed to a diagnosis. A sense of hopelessness can take root when a person’s identity is defined by a condition. Just as you wouldn’t refer to an individual with cancer as cancerous, it may be better not to refer to someone with a mental health condition as mentally ill.

Make some noise. Leading stigma researcher Patrick Corrigan of the University of Chicago and the Chicago Consortium for Stigma Research co-authored a 2002 study that sought strategies changing the conversation around mental health.

One of the study’s recommended strategies was protesting, including objecting to repeated inaccuracies in news reporting and speaking out against false depictions of stereotypes on television and in film. According to Corrigan and co-author Amy Watson, “protest campaigns have been effective in getting stigmatizing images of mental illness withdrawn.”

Nearly a decade and a half later, such beliefs still linger, and Corrigan believes stigma is to blame.

“These are based on stigma—the same kinds of prejudice and discrimination at the base of racism, sexism, and homophobia,” Corrigan said.

With mental health conditions, language matters. Try to identify people as separate from their condition.According to Corrigan and Watson, the battle can only be won by getting involved. Aside from protest, they also advised greater education and increased contact with people who experience mental health conditions. By getting involved, people may become more compassionate and better able to dispel common myths worldwide. This could be the first step in convincing policymakers to prioritize mental health for greater and more accurate public awareness.

The Carter Center Mental Health Program is working to shift public policy to broaden understanding of mental health issues and to reduce stigma. By normalizing a greater acceptance of mental health conditions and the people who experience them, policy can help reinforce concepts related to successful treatment and positive outcomes.

In a letter from the center, co-authored by former First Lady Rosalynn Carter, their strategy to battle stigma is active on multiple fronts. They emphasize the need to make new connections between mental health and other fields—including public health, primary care, and education—while “encouraging early intervention and access to treatments without fear of labels or diminished opportunities.”

These efforts offer the promise of changing widespread perceptions, but on a more individual level, they represent the potential for getting help without being judged and being included without being feared.