When in Love, Men Pitch In, Women Pipe Down 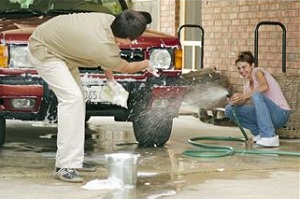 Men and women speak different languages, in life and in love. Most women like it warm, men like it cool. Women like cuddling and snuggling, men like hot and heavy sex. At least that’s what social norms tell us. But according to a recent article, a study conducted by Elizabeth Schoenfeld of the Human Development and Family Sciences Department at the University of Texas at Austin proves that just isn’t always so. In fact, after following 168 married people over 13 years, Shoenfeld found that the behaviors exhibited by those in love were quite different than what society would like us to believe.

Shoenfeld discovered that the women in love were less likely to instigate sexual encounters than those less committed to their spouses. Surprisingly, the men in the study did not report sex as their number one way of expressing affection either. In fact, the women in the study said that they were less likely to criticize or put demands on their partners when they were most in love. In other words, women nagged less. The men, on the other hand, did not commit random acts of romance like buying flowers or sprinkling rose petals on the bed. Instead, the men said that they got more involved in activities that their wife was engaged in, even chores, to express their loving feelings.

“If the wife is washing her car, he’ll pitch in,” Schoenfeld said. “Sharing activities and household tasks is what really seems to be connected to men’s love.” Shoenfeld believes that men may be confused as to how to display their affection. Because social norms dictate romance and intimacy, men who are naturally inclined to assist and get actively involved may feel like their efforts are being overlooked. Shoenfeld believes that her study shows that despite what popular culture and our modern society want us to think, men and women, even really happily married ones, show their love in a number of ways that may never make it to mainstream media. Sex sells, but doing dishes together doesn’t.

Related articles:
9 Secrets for a Lifetime of Like, Love, and Lust
Three Truths Every Couple Needs to Know About Marriage
How Do I Know I Can Count on my Partner?