The Practice of Mindfulness: Working with At-Risk Youth 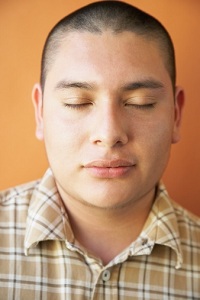 In the adolescent court diversion program where I spent a number of years as a counselor, Stress Management group came around once every three months. Although life skills training was strongly emphasized throughout the program, much repetition was required.

One day my co-facilitator and I had less than two hours to impart some useful information, connecting the concepts of healthy stress management practices, personal well-being, and sobriety for a group of boisterous, uproarious, and occasionally obnoxiously-behaving teens. As I dutifully copied much-used handouts and anticipated leading questions to get the group going, I wondered what could be done to arouse discussion of this topic beyond the level of interest we’d seen from clients in past groups, which mostly involved enumerating all of the things that others—parents, teachers, counselors, peers, law enforcement, and the judge—were doing to stress them out.

Understanding and Working with Clients’ Stressors

Reluctant to take responsibility for whatever behavior might have precipitated being arrested, charged, and referred to the program, many of the kids laid the blame for their woes at others’ feet. As might be expected, many were quite reactive to having their views challenged, regardless of how respectfully and therapeutically this was done. When it came to talking about antidotes to stress, group members often tried to steer the discussion back to one of their favorite stress relief methods—using alcohol and other illicit substances—turning the group into a forum for debate, rather than self-reflection and learning.

The appointed time arrived, and we headed to the group room to prepare for what I affectionately termed “the onslaught.” The kids began to tumble into the room, some bouncing off the walls from the effects of junk food and energy drinks purchased on their way from school at a nearby convenience store. The group rules were read, with emphasis on some of their more salient points, such as “Cell phones must be off” and “Only one person gets to talk at a time.” Announcements were made and warnings given to some members of the group who seemed to be having difficulty conforming to the rules. “Do you think you can stay in the group and follow the rules?” received a grudging reply of  “Yeah, I guess so.” Then we were off, finally talking about the topic of the day.

Many participants shared freely about their present life stressors: a breakup with a significant other, flunking a test, almost getting “jumped” at school or in the neighborhood, money problems, arguments with parents, community service requirements, being caught out after curfew, and so on. We had them write a list of stressors on the board and draw pictures depicting the stressful situations. By the time “break time” had rolled around, they had vented, there was very little white space left on the white board, and several sheets of paper were filled with creative drawings. Thus, the “problem” had been illuminated—but what of the solution?

Break time provided me with a few moments of quiet meditation. I realized how much I felt for the kids. I recalled my teenage years in the late 1960s: admittedly a time of great social and political upheaval, but in another respect a much simpler time, without the constant distractions of cell phones, computers, video games, iPods, and “instant everything.” “Back in the day,” as they say nowadays, life seemed more structured; I knew of fewer “latchkey kids,” fewer kids getting arrested, fewer kids selling drugs as a quick antidote to poverty, as a means of acquiring more “stuff,” or in order to pay support for children of their own. Although it was my job to help these particular kids understand the importance of taking personal responsibility and making wise choices, at times the task seemed daunting in the face of the magnitude of obstacles facing even successful graduates of the program: poverty, inadequate support systems, poor school performance, few job prospects, and easy access to their preferred stress management tools: alcohol and other drugs.

On this day, I wanted to teach my clients a stress-management tool whose effectiveness could be immediately seen: something that didn’t cost money, an obstacle for so many; something that could be done anywhere, with no props and or other participants necessary. I recalled how much my practice of mindfulness meditation over the previous ten years had benefited me: I felt less anxiety, less often; I was more in tune with my body, my inner self and the universe; and I was able to be more in control of negative feelings when they arose.

Could these clients, a third of my age, appreciate the benefits offered by mindfulness practice, and would they even be willing to try it? After conferring with my colleague, we decided that during the second half of the group we would conduct a bold experiment: I would lead the kids in a mindfulness meditation exercise, and we’d find the answer to that question.

“Okay, folks,” I announced as the kids piled into the room after break and managed to arrange themselves into some type of order. “We’re going to try something new today.”

“Are we gonna watch a movie?”

“Are we gonna play a game?”

“Well, what are we gonna do, Ms. Suellen? Are we going home early?”

I smiled. “We’re going to learn a new way to ‘chill,’ one that’s simple, easy, free, and won’t get you arrested.  Are you game?”

Thus began our first brief foray into mindfulness meditation. As they settled into their seats, I directed the participants to sit calmly, focusing their eyes on some object in the room, and to breathe, concentrating on noticing what was going on in their bodies, especially the process of breathing. If thoughts arose, they were told to accept them and let them go, returning to focus on their breath. “But miss, this is boring!” one complained at the outset—half-heartedly, almost reflexively. “That’s okay,” I responded. “Just notice what it feels like to be bored, then go back to concentrating on breathing.” “It feels weird!” said another. “So, just notice what “weird” feels like—and keep breathing,” I replied.

So it went, for about five minutes. As I sensed most of the participants beginning to twitch in their seats, I quietly instructed them that it was okay to return their attention to the room when they were ready.

“It was okay,” one responded. “It was straight [not too bad],” said another. “I felt really chill [relaxed],” answered a third. “Man, I could use this to fall asleep!” another responded. “I’m glad you didn’t,” I answered. I smiled again: sleeping was, of course, against the group rules. Having received our feedback, my cohort and I exchanged looks that said, “Operation successful.”

Implementing Mindfulness Exercises in Class and with Individual Clients

After this initial foray into mindfulness, I would occasionally introduce the group to an exercise when the program curriculum was compatible. I found meditation especially useful for grounding at times when I felt the group dynamic spiraling toward potential chaos. I used mindfulness practices in combination with discussion of the Serenity Prayer to promote the idea that although we can’t always control what happens to us, we can control our reactions. I also used mindfulness combined with creative visualization to help individual clients.

One anxious person felt calmer after a session during which we “breathed in purple,” her favorite color. Another client practiced imagining himself surfing at his favorite beach and breathing in the color blue. This helped to dissipate frequent episodes of anger—when he remembered to do it, he admitted somewhat sheepishly. Still another, at times when he felt his temper flaring, visualized himself hitting a home run in baseball and grew to feel less reactive to a teacher who he said “picked on” him in school. I found myself gratified during a session as one young person discussed a “homework” assignment I had given him: he described what it had been like to sit on his front porch one evening, noticing the chirp of crickets, the smell of orange blossoms in the air, and the touch of a warm breeze on his face, just living in the moment. He said that he liked it, although it was quite different from his typical leisure time activities (which, not surprisingly, had gotten him in trouble in the first place).

Mindfulness is a practice that teaches us to focus on the here and now; to be more accepting of ourselves, our thoughts, and our feelings; and to be less reactive to the things going on around us that we can’t control. Teenagers are in a stage during which much of life is not within their control—or, at least, they perceive it that way.

Mandated clients are not always the most receptive to counseling, to say the least, and mandated teen clients can be an especially difficult population to work with. But are they reachable? Absolutely, if one has patience, a sense of humor, and willingness to improvise. I like to think that practicing mindfulness, even to a limited extent, helped “my kids” learn that despite what life throws at us, we can maintain control: we decide whether and how to react. This journey to self-awareness is one of the many benefits of learning to be mindful, and it can begin earlier than we might have imagined. We just need to believe in the growth potential of our clients, and in our own ability to nurture the process.