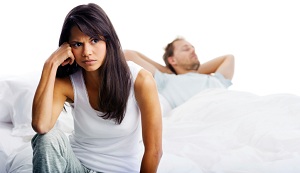 The new movie This is 40 has a lot of people talking. It is not only crass and funny, but also controversial. The two main characters in the movie reveal that they have secretly fantasized about killing each other. The wife admits to her husband that she has thought about poisoning him with a cupcake. The husband, on the other hand, tells his wife that he had contemplated putting her through a wood chipper. And as they share their morbid fantasies, the married lovers lie in bed looking relaxed and playful. Their fantasies, detailed in the warm light of their bedroom and the safety of a loving relationship, are as far from threatening as they could be. But what does it say about their relationship that they actually do have fantasies like this?

According to Benjamin Karney, a psychology professor at the University of California in Los Angeles, people who fantasize about killing their spouse, or about being a widow or widower, may do so because it allows them to escape taking blame for the failure of the marriage. They may think of it as an escape from a difficult marriage, but an escape without blame. It is not clear how many married couples have these types of fantasies. Rarely do you hear a spouse ask their husband or wife, “Do you ever think of killing me?”  But it doesn’t mean it never happens. Violence of any kind, including intimate partner violence, is not something to joke about. Rates of partner homicide are startlingly high. But the movie does show that communication styles can say a lot about a relationship, even when that communication is murderous.

Howard Markman, a psychology professor and co-director of the Center for Marital and Family Studies at the University of Denver, said that when the stars of the movie had their gruesome conversation, they were playful and intimate with each other. In fact, the whole topic of murder began with the wife wanting to discuss their conflicts. The husband, who was anxious and worried that another conflict would erupt, chose to use humor as a way to broach the subject. According to Markman, this type of strategy, even without the wood chipper or poison cupcake, can indicate a successful relationship.  “They still need to talk about her initial question, but this is a great model for couples,” said Markman. “It starts out negative, but then turns positive.” The movie is raising a few eyebrows; that’s for sure. But it also shows us that there is no one model for a successful marriage.