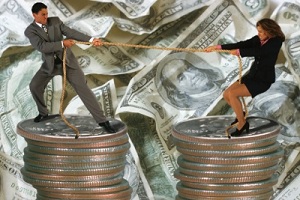 It’s nearly impossible these days to pick up the paper or turn on the news without learning of yet another study or statistic indicating a weak recovery or a chronic recession. While it has taken its toll on families and communities in the way of foreclosures and bankruptcy, the recession has struck at marriages too by introducing many money and financial issues. Many couples would admit that it has increased tension and even conflict in their relationship.

An article by Ron Lieber appearing in the New York Times in 2010 highlighted the importance of fleshing out a couple’s relationship to money by explicitly discussing the issue. While doing so prior to tying the knot is preferable, it’s never too late to identify and discuss your relationship to money, provided you do so in a mutually respectful manner and agree to disagree on some matters.

One couple I know, call them Fannie and Freddy, provide a wonderful example of the capacity to joke about their different approaches to spending. They’ve coined their different styles as “the rounding problem.” Whenever Fannie purchases an item, she is precise about it’s cost. If she has budgeted $300 for a new suit and finds one that costs $329, she will forego it. Freddy on the other hand, always rounds down. If the auto mechanic quotes him a price of $680 on a repair job, he’ll report back to Fannie that the work will run them around $600. “He must have been home sick with the flu when they taught the principles of rounding at school,” jokes Fannie. “It used to drive me crazy when we would budget for something and then Freddy would go over our limit by $50 or more.” Now she playfully calls Freddy mathematically challenged and they both have a good laugh. “By the way,” Freddy adds, “I’m not so sure Fannie would be that generous in spirit if we were struggling financially.”  Annie nods her head and quips, “we’ve agreed that when we both hit retirement, Freddy will have plenty of time for lessons in rounding down!”

Questions to Guide Money Conversations
Before you can become playful or embattled around money issues, you both need to know where you stand. In his article, Ron Leiber identifies four areas for exploration:

These discussions need not be heavy or confrontational. Maybe you explored this topic at length in the early days of your relationship. Don’t assume, however, that your partner’s attitudes and actions in connection to money have remained static; circumstances and life experience have a way of altering expectations and beliefs. So, as with other key aspects of your relationship, take the time periodically to check in with each other. If you never explored this territory with each other, by all means take the time to do so. Rather than jumping into arguments about nickels and dimes, first get the lay of the land.