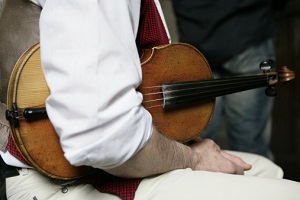 Music, as we know, is a source of comfort, expression, relaxation, and enjoyment. More recently, it has become accepted as a highly effective form of therapy. Music therapy programs are popping up in colleges and universities to aide in healing chronic pain, depression, and anxiety, as well as in soothing the minds, bodies, and spirits of those who are in the process of dying via music thanatology.

Interestingly, scientists at the Max Planck Institute for Human Development in Berlin have also established that the brain activity of musicians tends to sync up when making music in group settings (2012). By attaching electrodes to the heads of 32 guitarists as they played in 16 duet pairs, the researchers discovered a fascinating interbrain network emerging between the individuals in each duet.

Parts of the brain typically associated with social cognition and music production lit up within each person’s brain, as well as between the two brains playing the same piece. This suggests that when actions are synchronized or being performed as part of a team or joint effort, the “brain waves” of those involved also become synchronized.

One organization devoted to promoting music as a form of group therapy is Renovation in Music Education (RIME). When composer and founder of RIME Arthur Bloom visited a soldier recovering from injuries inflicted by a roadside bomb at the Walter Reed Army Medical Center, he saw many of the veterans simply sitting and staring into space once their morning meetings were over, with no afternoon activities to keep them engaged.

He also learned of this particular soldier’s desire to play music in spite of his roadside bomb-induced injuries. Bloom felt compelled to somehow alleviate the pain and isolation this man and other veterans face upon their return home, so he decided to create a music program.

The program, Musicorps, offers “advanced music rehabilitation for wounded warriors.” Videos on the Musicorps site reveal the heartbreaking reality of lost limbs and disfiguring scars, but they also show the healing power of coming together to make music. Traumatic brain injury is the most common of those sustained by veterans of the wars in Iraq and Afghanistan, and the veterans who participate in the program have also lost legs, hands, fingers, and eyes. Still, they play guitar and piano and sing together, and they have now performed at a variety of functions and venues as the Wounded Warrior Band; videos of these performances can be viewed online at the Musicorps Nation YouTube channel.

Lance Corporal Timothy Donley, a veteran who lost both legs and is now confined to a wheelchair and is the lead singer for the Wounded Warrior Band, says in a video posted on the site (see below), “I’m lucky. I’ve had both music and being a marine in my short lifetime so far. It’s something really exciting to look at the future and see the possibilities.”

Captain Antoine Bates, a U.S. Marines Ground Intelligence Officer, also featured in the video, says, “As a leader, I’ve seen some of my marines down, depressed. They come, they meet Arthur, and within a week or two, they’re happy. This program has changed service members’ lives.”