Making History: A New Wave of the Nurses’ Health Study Is Here 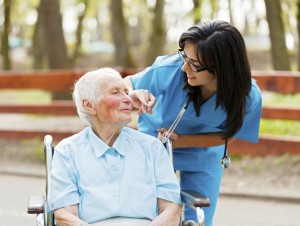 Where would we be without nurses? You know, the men and women donned in brightly colored scrubs who scurry around hospitals and doctors’ offices tending to an endless stream of patients; drawing blood and doling out medicine; checking vitals and making notes for doctors; and often communicating with family members and loved ones.

They offer comfort and hope to those who endure the struggles of chronic illness and disease and cannot always see the light at the end of the tunnel. In hospice care, they sit at the bedsides of those who are dying and offer whatever is needed to make their final days as carefree and comfortable as possible.

With all they do in the realm of health and healing, it may seem as though little is known about the personal health of these individuals whose work lives revolve around the needs of others. However, unbeknownst to many in the general population, for over 35 years female nurses have been responding to detailed questionnaires pertaining to their health, habits, and lifestyles as part of an ongoing set of studies known as The Nurses’ Health Study. The responses gathered from these questionnaires have played a significant role in shaping present-day medical knowledge and understanding of women’s health issues.

According to The Nurses’ Health Study website, the first of these was launched in 1976 by Dr. Frank Speizer, who enlisted the help of the National Institutes of Health to examine the long-term effects of oral contraceptive use in women. He chose to focus his efforts on married women between the ages of 30 and 55 who were registered nurses by profession. The study sought out nurses, in particular, because it was believed that their training and education would ensure the accuracy of their responses to the lengthy, “technically-worded questionnaires” that laid the foundation for a research undertaking that now spans several years of data collection.

Nearly 122,000 nurses participated in the original study, and with The Nurses’ Health Study II initiated in 1989 by another doctor and his colleagues, close to 240,000 nurses have contributed to date. Participation involves filling out an initial questionnaire and then answering follow-up forms by mail every two years. The questions examine each woman’s health status, including any hormonal or menopausal issues as well as illness or disease that develops, and lifestyle habits that affect health such as smoking, drinking, food intake and eating habits, and engaging in physical exercise.

“Quality of life” questions were added to the mix in 1992 at the request of participating nurses. Researchers have even gone so far as to request toenail and blood samples of some of the participants to measure hormone and mineral levels, as well as to identify any genetic indicators of potential health risks.

Over the years, the responses of these women and the samples they’ve provided have influenced and shaped public guidelines and recommendations for preventing disease and maintaining optimal health. For example,

The findings go on and their usefulness has led major nursing organizations like the American Nurses’ Association and the National Federation for Licensed Practical Nurses to endorse the study. In 2010, a team of doctors began preparing for a third round in collaboration with researchers at the Channing Laboratory and the Harvard School of Public Health. The new study intends to delve even deeper into the health histories of women, including issues surrounding fertility and pregnancy and environmental exposures.

If you are a female nurse between the ages of 20 and 46 who is currently living in the United States or Canada and you would like to participate in the Nurses’ Health Study III (NHS3), more information is available at NHS3.org.