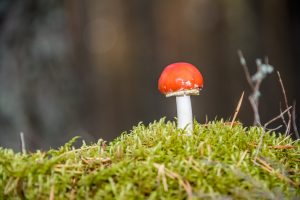 Psilocybin—the hallucinogenic compound in so-called “magic” mushrooms—can effectively ease cancer patients’ depression and anxiety, according to a study published in the Journal of Psychopharmacology. As many as 40% of cancer patients experience depression.

Testing the Effects of Mushrooms for Cancer Patients

The study followed 51 people with life-threatening cancers such as digestive, breast, and blood cancers. Most (92%) were white, with a roughly even split between men and women. Participants’ average age was 56. Each had been diagnosed with depression or anxiety.

Participants underwent two treatment sessions five weeks apart. One session provided a psilocybin dose too low to affect mood—1 or 3 milligrams per 70 kilograms of weight. Another session offered a higher psilocybin dose of 22 or 30 milligrams per 70 kilograms of weight. Each participant received assistance from two monitors who encouraged them to relax with the assistance of music and an eye mask after each session.

The staff supervising each dose did not know participants received different doses, reducing the possibility that their expectations could skew the results. Participants did not know whether they received the treatment dose or the placebo. This double-blind model was designed to reduce bias and minimize misleading results.

Participants completed interviews and questionnaires about their mood, feelings about life, and behavior before the first session, seven hours after each dose, five weeks after each dose, and six months following the final session. At the six-month mark, 80% of participants had reductions in depression and anxiety, with 60% no longer experiencing symptoms severe enough to warrant a diagnosis. Participants said they found the experience of taking mushrooms highly meaningful, with 67% rating the experience as one of the five most significant events in their lives.

Negative side effects were minimal, with 15% of participants vomiting or becoming nauseated. About a third became anxious or experienced some other psychological symptom such as paranoia following the dose, and another third experienced brief blood pressure increases.