Losing My Self in Your Feelings: Empathy and Identification 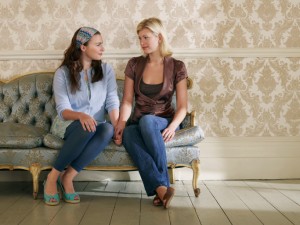 Relationship issues and communication problems are frequent reasons many individuals and couples come to see me for therapy. One aspect of the work is to explore feelings and conflicts in relationships and empower people to engage with their partners with the aim of understanding and being understood. To do this, we look at what interferes with the ability to be empathic to the other’s experience. It would seem that understanding where the other person is coming from and seeing their point of view would not create difficult problems in relationships. However, it turns out not to be so simple. The loss of one’s sense of self in the process of engaging another’s feelings must be addressed.

The Risk of Empathy

As I engage with these people in therapy, I often discover that there is a limitation in the ability to be empathic in relationships, especially in situations where there is disagreement. Some believe that acknowledging empathy when there is conflict puts them at risk because the other will mistake their understanding for agreement. If that should occur, the empathic person can feel like their thoughts and feelings have been dismissed and negated. They fear that their expression of empathy will be seen as acknowledging the rightness of the other and they will be the loser. The feeling is not just of losing the argument, but a loss of some piece of the self.

Glen and I were working on his feelings of helplessness with his partner, Alan. They had been a couple for six years, but to Glen’s disappointment, he could not get Alan to agree to move in together. Each time Glen suggested they give it a try, Alan got angry and told Glen to stop nagging him. He would say he loved Glen, but had no interest in living together. Glen would feel hurt and pushed away.

“He is so mean to me,” Glen said. “I don’t know why I stay with him when he repeatedly rejects me. Can I really believe that he loves me when he treats me this way? You know how scary it is for me to speak up for myself in my life. You and I have been working on that and now that I’m doing better and asking for more, what good does it do me? When I ask Alan for what I want, he still mistreats me.”

I asked Glen: “What do you understand about why Alan, who has stayed with you for six years, won’t move in with you?”

Glen replied: “He says that in his last relationship, living together was a disaster and he and his partner fought constantly. But just because it makes him anxious that our relationship will become like that is no reason to keep denying me what I know will be perfectly fine. I just think he wants to control me. He is talking about his history and absolutely refuses to see us as different. I get so hurt and angry. He can get really sad and even cries sometimes when he tells me how painful that relationship was. But he needs to get over it.”

Glen could see only his own point of view. It was very difficult for him to be empathic—to get him to consider what it would be like if he put himself in Alan’s shoes. He became very irritated with me.

“I don’t get it,” Glen said. “You have helped me to learn more about who I am and what I want, and now you want me to abandon my own thoughts and feelings and wear Alan’s shoes. I need to stay in my own shoes. Alan’s shoes don’t fit me. Maybe he should try my shoes on for size.”

I asked Glen to tell me more about what he thinks the downside would be if he could empathize with Alan. He had no trouble replying.

“If I let myself feel what it’s like to be Alan and recognize his worries and anxieties, it will legitimize his point of view. What I want will lose all meaning. I know I’m right about this. We have had this fight for almost six years and now he would win. I don’t want to be a loser. You know, for the most part we have a good relationship. We spend a lot of time together; we love each other; we have fun. But every time I bring up that if we don’t live together it isn’t a real relationship, we get into a huge fight. Then it feels like we are enemies and neither one of us will give in. I’m afraid that if I stop fighting for this, I will become helpless and powerless in the relationship and disappear. Sometimes I even think Alan would leave me if I gave in because he would think I’m a wimp with no sense of who I am or what I want.”

Glen mistakes allowing himself to understand how Alan feels about moving in together for agreement with Alan. He is stuck on the idea that he will be a “loser” if he is empathic. But his biggest fear is that being empathic means he will betray his own wishes and lose a part of himself.

In contrast to Glen, Katy is concerned that she has too much empathy. She came to see me because she was feeling overwhelmed with feelings of having to care for her aging father and, at the same time, attend to her daughter who had just left for college and was having a difficult time adjusting. She described her emotional situation as follows:

“I am so filled with feelings I can’t breathe. My father is very sick with cancer. He’s scared and very demanding. I feel so much empathy for him. I’m frightened, too. We’re so close. What’s going to happen to me when he dies? I’m also on call for my daughter. She can’t seem to settle in at college. She calls me every day. I spend hours trying to soothe and reassure her. I know just how she feels. I remember when I went away to school and my parents would try to help me. She is such a mess. I’m such a mess. My father needs the same kind of soothing she does. I guess I do, too. My husband tries to help, but he thinks I’m over-involved. I don’t know how I could feel any other way. My father and daughter are both in pain, and I can’t help but share their feelings.”

Katy saw herself as a loving and responsible daughter and mother. She believed her response to her family members was the “right” way to feel. While she acknowledged feeling burdened by the demands made on her, she thought that “it’s my duty to give my all and do my best to make them feel better.” She recognized that for months she had given up much of her own life to devote herself to her family. Not only was she exhausted, but it was creating conflict with her husband: “He told me that I’m always anxious and preoccupied and that I’ve disappeared from our relationship. He says it’s OK to worry and help, but he accused me of being consumed with my father and our daughter. He keeps saying, ‘Where are you? I want you back.’ ”

Katy describes herself as feeling empathy for her father and daughter. These intense feelings, however, are not empathy. Empathic feelings occur when one can emotionally imagine what it is like to be in another person’s feeling state. Someone with empathy strongly feels what the other person is feeling but maintains a sense of being separate. In contrast, Katy is identifying with her father and daughter. She can’t maintain her separate self. The feelings she experiences are the same as the feelings her father and daughter suffer. She is identifying with them and taking on their feeling states. She cannot have her own separate, empathic feelings. Her sense of self is lost.

Loss of One’s Sense of Self

The therapeutic work with Glen and Katy could easily focus on the concrete problems each of them brings to their sessions. Glen and I could work on his becoming comfortable with Alan’s refusal to move in together. Or we could look at what makes Glen feel so mistreated and rejected when this occurs. And we do explore those issues. Katy and I could work on her anxiety and guilt about her conflicts and limitations in helping her family members. And we do work on these issues as well as on her relationship with her husband.

Empathic feelings occur when one can emotionally imagine what it is like to be in another person’s feeling state. Someone with empathy strongly feels what the other person is feeling but maintains a sense of being separate.

But the therapy with both these individuals has been most productive when we address the feelings of loss of self. For Glen, conflict in the relationship is exacerbated when he refuses to empathize out of fear of losing himself. For Katy, there is no room for herself when she identifies with the other and becomes overwhelmed and infused with everyone else’s feelings.

As we dig deep into the dynamics of these two relationships, we are left with the necessity of having to explore: What happens to me when I am faced with the other person’s feelings? Glen struggles with considering that he can try on Alan’s shoes and appreciate how they fit Alan, even if they are not his style. He is beginning to recognize that he can like the look for Alan, but know that he doesn’t have to change the style that is right for him. Katy looks at how she responds to her father’s and daughter’s feelings and is learning that she is not the same person as her family members. She is starting to recognize that she can set boundaries and still be a good and loving family member. It is not easy, however, to separate and feel for them, rather than become them.

As Glen and Katy come to understand what has interfered with their being empathic, they are in a better position to relate to their significant others in loving ways while retaining their sense of self.