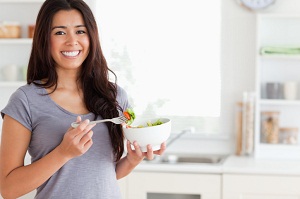 When it comes to eating and food-related problems, various philosophies determine how eating problems are defined and addressed. When the eating disorders treatment field was in its infancy, professionals often based their approaches on those used in the treatment of alcoholism and drug addiction. The addictions model has been used to salvage the lives of alcoholics since the formation of Alcoholics Anonymous (AA), in the 1930’s. AA spawned myriad other twelve-Step programs for addressing various addictive problems. One of the earliest of these was Gamblers Anonymous (GA). Overeaters Anonymous (OA), a twelve-step self-help program for people who feel compelled to overeat, was created in 1960, modeled after GA. OA philosophy views compulsive overeating as an addiction to both a substance – various types of food – and to the behavior of overeating compulsively. As OA grew, people suffering from all types of eating problems began attending, and found help there.

However, as research on eating problems proliferated, and eating disorders came to be better understood, health care professionals began to recognize that while twelve-step programs offer members an unparalleled access to peer support, a practical spiritual philosophy, and a systematic approach to healing at nominal cost, the twelve-step philosophy doesn’t always translate well from its originally intended formula as a treatment of alcoholism to an effective means of treating disordered eating.

Applying an addictions model to eating problems means believing that a person has a disease that causes them to be addicted to certain types of foods, certain eating behaviors, or both. The recovering person practices abstinence, the corollary to an alcoholic’s sobriety. This might mean eating only at meal times, or refraining from eating refined sugars, or from other types of food or eating behaviors. Thus, a between-meal snack or a piece of pie at the end of dinner would be as much a break of abstinence as a no-holds-barred eating binge. This perspective dangerously mimics eating-disordered thinking, which says that eating outside of certain predetermined rules is bad.

Eating-disordered thinking comprises certain thought patterns that are common to all types of eating problems. These patterns include the beliefs that the person thinking the thoughts is weak and lacks willpower, and needs to follow certain eating guidelines to feel safe and good about him/herself. Some tenets of the addictions model, e.g., that the sufferer has a disease from which he can never be fully recovered, that sufferers cannot trust themselves, and that self-confidence is a liability rather than a strength, are quite resonant with the voice of the eating disorder itself. Eating disorders sufferers feel intense shame about their appetites and desires. The addictions model, when misapplied to disordered eating, attributes these appetites and desires to “the disease,” rather than exploring their significance.

The disease concept helps relieve alcoholics and addicts of the shame they experience. It helps them understand that their behavior is not a function of personal weakness or flaws, but of an affliction they have. However, it also teaches them that they can never fully trust their thinking because their disease might be influencing it, that they must learn to live with it. A common saying in twelve-step programs is that it’s important not to become complacent because the disease is “always in the next room, doing push-ups.” While this perspective can be very useful for a recovering alcoholic or gambler, it can backfire on a disordered eater.

While eating disorders treatment professionals often find it helpful to separate the disorder from the person, much as addictions philosophy does with the disease concept, the focus is on developing a strong sense of self-confidence and self-worth, and letting go of an eating disordered-identity. The goal is to learn to live without the disorder. Appetites and desires for all kinds of foods are regarded as normal and healthy, and when they surpass desires for “normal” amounts, they are seen as indicative as hungers for other things a person needs.

An integrative model of recovery encourages attention to the body’s wisdom, a reconnection to hunger and satiety signals, and development of self-trust. It says that while recovering people often benefit from nutritional guidance and eating plans, there are no off-limits or bad foods, no rules to be broken. A commitment to stop dangerous behaviors such as purging via laxatives or self-induced vomiting, compulsive exercise, and bingeing, comes at different points in people’s recovery.

An integrative approach to treating disordered eating draws on therapies that address behavior, cognition, emotions, body image, and spirituality. It helps people who struggle with food-related problems to connect to the parts of themselves that are hungering for something bigger and deeper than food, and to feed those hungers appropriately. For people in twelve-step programs for their disordered eating, an integrative approach can incorporate the positive aspects of an addictions approach, while empowering them to return to a state of balance and self-trust, and develop an intuitive and satisfying relationship with food and with themselves.