Are the London Riots a Result of Groupthink? 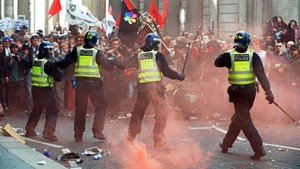 The recent riots in London are the worst the city has seen in years. However, the psychology that lies at the root of the mob mentality is apparent every day, everywhere. What spurs thousands of young people to damage and destroy inanimate objects? What prompts groups of people who have never met to commit criminal acts in seemingly orchestrated unison? What emotions are elicited that cause individuals who are conscientious when alone, to become unconscionable when united?

People succumb to peer-pressure in nearly every aspect of their lives. Children give in to the negative influences of friends. Adults overspend in order to keep up with the Jones’s. And oppressed youth rally together to release the frustration and anger they feel toward authority. Social media has made it incredibly easy for bands of people with a common grudge to join together and become formidable forces. And yet, most of these people, when alone, would never consider acting out in such ways.

Irving Janis termed this type of behavior as Groupthink. The individual thoughts of one person are overcome by the more powerful, more persuasive, thoughts of the group, while rationalization and experimentation are cast aside. Is this what happens in a riot situation? Is this why most of Los Angeles was under siege during the Rodney King riots? Is groupthink responsible for the recent rash of burglaries committed by flash mobs in the United States? Did our entire country develop a surge of patriotism as a result of groupthink following 9/11? Good or bad, the persuasive power of group cognition often suffocates individual intellect.

But you have to wonder; don’t these young Brits know what they are doing? Don’t they have even a little inkling of the financial, emotional and physical damage they are causing? They must realize, now that another life has been lost amidst the chaos, the senselessness of their actions. They must know that even though they might feel a little better after smashing in a window or throwing a few bricks, that someone will feel worse. And yet, they seem helpless to stop themselves.

If I was in the midst of a mob like that, I don’t know what I would do. Would I rush to help a shop owner try to secure their goods? Or out of fear for my own well-being, would I grab a few items off the shelves and disappear into the safety of the unruly crowd? Would I, like the children in Lord of the Flies, begin to shout, “Kill the pig, cut her throat, spill her blood?” I would like to think, as I sit here in my safe home, far from the crime that is unfolding all around me in the world that I would be strong enough to resist the pressure to conform. I would like to think that even if my own safety was in question, or the safety of my children, that I would have the resolve and conviction to do what is right. I would like to think that even if I experience a momentary lapse in judgment that my deeper self, my true character, would prevail and I would do what is right, no matter what the cost.

But I am not in London. I am not in a cult, at the mental mercy of someone else. I am not facing starvation on a desert island. So I guess I’ll never know. Until, that is, I am faced with that situation. And when and if that happens, I hope I have the support of grounded, guided people around me just in case I temporarily lose sight of my own morality.