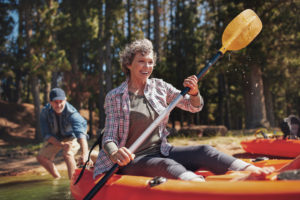 When I think of white lies, I think of a true story about me and my mother. Not an intimate relationship, I agree, but still the sort of thing that could happen between married partners.

Though I had been married since the previous year, and my husband and I very much wanted a child, I could not seem to get pregnant. Meanwhile, my mom was struggling with depression and could not get over the loss of my father. Also—and this is the key point—she had a bad heart and had been told she needed open-heart surgery, but she was refusing it.

While visiting her in the hospital, as I did almost daily, I finally mustered up some excitement and said, “Mom, I’m pregnant!”

Yes, I lied—but it worked. That same day, my mother told her doctor she would go through with the surgery (Interestingly, I was saved from embarrassment about 11 months later because within the two months following her successful surgery, I did get pregnant, and she was a very happy grandma.)

In my opinion, the real question you must ask yourself when deciding whether lying is the right thing to do is this: Who are you protecting? It’s really that simple. I would have done just about anything to save my mother’s life. The lie came from my heart and was intended solely for her benefit, not mine.

According to people who detect lying and liars as part of their profession (detectives, members of the FBI, and so forth), we all tell “white lies,” or lies intended to protect others, every day. “That dress is gorgeous on you!” is something we might say to protect someone we care about or to protect the relationship we have with them, for example. We understand the listener would not benefit from hearing the truth and would likely feel hurt instead.

Pamela Meyer, author of Liespotting, became concerned with the growing lack of trust in our society and its implications for business and families. Her book, based on a review of all the literature on deception written for the intelligence community, explains that each person is lied to—and lies—from 10 to 200 times a day!

The Effects of Lying

How is it possible to lie and be lied to so many times? Consider how many times you say, “I’m fine” when someone asks how you are and you aren’t actually “fine” at all? This, according to Meyer, is a lie. What’s wrong with it? Nothing, really. We certainly don’t want to bother the cashier, a complete stranger to us, with the fact that our son just underwent surgery, we just lost our pet, or whatever else we’re troubled with.

Lying might be hardwired into us. Babies will cry and then pause to see if someone is coming before going back to crying. Children automatically lie to get out of trouble, and by the time they graduate high school, they may lie to their parents in one out of five interactions. Lying makes the liar unable to be vulnerable in the relationship. When we lie, we are putting a wall between us and the person we are lying to.

Whatever the type of lie or reason behind it, when we lie so frequently, we build up a tolerance for lying itself. This means it can become easier to tell bigger lies when we think they’re called for. And while we may tell white lies to protect others, we might also begin to lie more to protect ourselves. This is where the problem begins. We may justify lying to ourselves as lying to protect a relationship, but actually we’re doing it to save our skin.

Let’s take a step back and ask a different question first: What do we gain from our intimate relationships? Research shows that happily married people experience a number of physical and mental health benefits that can lead to longer life. When people believe their partner is their best friend, health benefits may be even greater. Logically, then, what we might want from marriage is a feeling of connection and closeness and a partner we consider to be our best friend.

Lying can impact this intimacy by affecting all parts involved: the one who lies, the one who is lied to, and the relationship as a whole.

How Lying Impacts the Liar

When we are open and honest, we expose our vulnerable selves. Vulnerability means we are willing to let a partner to see our flaws. Having a loving partner who accepts our flaws both can help ease any stress we might experience as a result of having them and help us accept that we are all right after all. When our worst shame is laid bare and our partner accepts it, and accepts us in spite of it, then we can breathe a sigh of relief. We can relax and be ourselves. That is what intimacy is all about.

Lying, however, makes the liar unable to be vulnerable in the relationship. When we lie, we are putting a wall between us and the person we are lying to. Meyer found that married people lie to one another, on average, in one out of every 10 interactions. Unmarried people lie to each other approximately one in three times.

There are consequences to this dishonesty. People may not consciously know that someone is being deceptive, but—get this—they tend to like them less. So a person who lies somehow unconsciously reveals the fact of their dishonesty and as a result is liked less because they were not honest. What’s more, the deceived person will tend to lie to that person more frequently in response.

And all that from unconscious awareness!

Speaking of metaphorical walls, the worst of the walls we put up are the ones between ourselves and ourselves. Why do you think trained deception experts can spot liars through certain body language giveaways like saying “no” but shaking our head “yes”?

On some basic level, we don’t want to lie. As much as babies put on a show to manipulate adoring adults, they’re also told lying is wrong. So we grow up in a culture where both the powerful advantages of lying and the immorality of it tear at us. We handle the discrepancy through body language, choice of words, and use of (or lack of) pauses that often give us away to those who are trained to spot the inconsistencies.

People who tell lies often may themselves not even be aware they’re giving away their deception. While consciously trying to lie, they may unconsciously reject the lie—but they don’t know it. That’s how much they have cut themselves off from their own thoughts and feelings, their own self-awareness.

How Lying Impacts Those Lied To

For those deceived, the word “betrayal” is often inadequate. Researchers have found that even in cases of compulsive cybersex, spouses stated they felt traumatized by the discovery. At the very least, spouses or partners lost trust and sought out professional help. (Of interest is that in spite of this, adultery is not cited a major cause when people give reasons for divorce.)

People also tend to lie about financial and health issues. I heard of a person who divorced her husband because he did not inform her he could not have children before they were married.

In another case, when a wife asked her husband to take money out of the stock market to pay bills, he would always say that he could not get the money out on the same day when in fact he could. The result of the late delivery of money to this stay-at-home mom was humiliation over bounced checks and late payments. After he died, she discovered the lie, which he had repeated over many years, from his broker, and she felt betrayed and angry, which significantly impacted her memories of her marriage.

The good news: There is recovery from intimate partner lying. Often, with help, the relationship does not end but heals instead. The person who cheated or lied for some other reason must learn why they could not trust their partner to understand their needs and motives in the first place.

You see, while the deceived person loses trust when the truth comes out, the liar had already lost trust in the person they lied to or else they wouldn’t have needed to lie. Why didn’t the person who couldn’t have children share the truth? Perhaps his fiancée would have been willing to adopt. Why couldn’t the husband share his reason for holding onto the stock market money one extra day? If he hoped the numbers would go up, why was he afraid to share that?

While people who lie to their partners have a lot to learn about their fears of being open and vulnerable, those who have been lied to can learn if messages they gave out may have contributed to the problem. In spite of the pain on both sides, when the walls erected in a relationship are brought down safely and carefully, much good can come of this new openness.