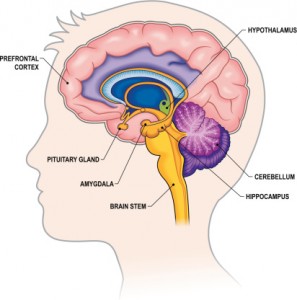 unctions as well as emotion, learning, memory, and behavior. It is the part of the brain that feels and reacts, and although it is generally under control of the “thinking” part of the brain, it can react to stimuli on its own.

Parts of the Limbic System

Included in the structures of the limbic system are the hypothalamus, one of the busiest areas of the brain, the hippocampus, which plays an important role in memory and spatial navigation, and the amygdala, which coordinates responses to stimuli and plays a part in emotion.

Some other areas near the main structure of limbic system include:

Scientific opinions on the role of the limbic system have shifted significantly in recent years. When the limbic system was first discovered, it was believed to be the emotional center of the brain. However, research showed that damage to this part of the brain also resulted in memory and cognitive impairments, indicating that it plays a significant role in other brain functions, as well. The limbic system as a whole is only loosely connected, and some scientists have argued that its individual parts should not necessarily be treated as part of the same system. Others point out that the way the parts work together enforce the fact that they are clearly a cohesive system.