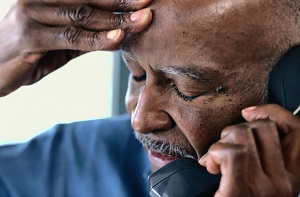 “Margie” felt free for the first time in decades. She knew who she was. She no longer worried that she was inadequate in some way. Most important of all, she decided that she deserved better: She would not accept the abuse—not of herself, not of their son, and not of others.

Stating a position is one thing. Backing it up is another. Because of all the people who came to her as their pastor, Margie knew that words are easily ignored. Margie also knew that when someone says they’re not accepting any more of something, they have to be prepared for the worst.

Maybe the Worst Is Not So Bad

The day she made up her mind was gorgeous as she drove home from work. The colors of the day were vibrant, and the temperature felt just right. She wondered, can the same God who creates sunshine and flowers really bring so much evil on us? The answer was apparent on a stunning day like this: No, we bring the evil on ourselves.

We have the choice and the freedom to put up with it—or not. With God’s grace, these situations make us stronger and better, truer to whom we really are. If I am supposed to learn who I am and what my intrinsic worth is, then He probably wants me to put that learning into practice, Margie reasoned.

Margie prayed many days over the next step in her journey. It would not be pleasant, and the ending could be worse. No, wait! She stopped herself. That’s completely wrong. If God only wants the best for us, then even if it feels bad, it doesn’t mean it is. It’s kind of like exercise; you don’t enjoy that experience when you’re struggling to catch your breath, but you feel great later on.

What’s more, she reasoned further, I really am in a win-win. If my husband learns a lesson, then it’s a win. If he doesn’t care and wants a divorce, then it must be a win too because I won’t be suffering anymore and all our years together were for the purpose of awakening me to what I have just learned.

Not many days later, Margie’s resolve was put to the test.

She walked into the house and heard an elevated voice. Following the sound, she entered their joint office where “Martin,” her husband, was on the phone yelling at somebody in India because the tech support he was being given was not supportive enough. “Who is your supervisor?” he demanded, “because I’m going to have you fired. You will regret the moment you took my call. I will make your life miserable.”

The weird part of this is that Margie had been over this nonsense with Martin before. Clearly, his threats were too over-the-top to get any notice. Further, she had told him, he never did follow up with the threats, so why make them? It made him a totally unreliable person.

She had told him on numerous occasions that he needs to speak courteously with tech support no matter how frustrated he is. Her words fell on deaf ears. This time was different: she said nothing. She had nothing to add to what she had already said many times. The words Martin had had with their son still inflicted pain as they echoed in the back of her mind. She did not want to talk to Martin at all. His very being disturbed her more than she could measure.

She walked into the office, picked up her computer and took it to another room to work on next Sunday’s sermon. Martin hung up his call, seething, but noticed Margie leave. “Where are you going, dear?” he asked.

The “dear” rankled her. It felt like a complete cover-up of all the evil that he was doing. It was as if, in Martin’s eyes, he did nothing wrong and everything was fine. Denying the pain he was sprinkling all over was too much for her. “Please don’t call me ‘dear,’ ” she told him. Then she took in a deep breath; she knew she opened the door on something ugly.

“Excuse me?” he said, honestly perplexed.

“We are married 30 years,” Margie responded. “You know clearly that what you said to that poor guy over there was wrong. You can’t pretend that I am not hurt already, then add this to it, and then make nice-nice.”

“What would you say, then, Miss Perfect?” he replied angrily. “Those characters keep you busy on the phone for two hours and then don’t even fix the problem. Am I supposed to be nice to them?”

“I have responded to this before. I am not going to argue with you,” Margie answered, leaving the room.

Martin stormed after her. “Don’t walk out on me!” he exclaimed.

“No, I wouldn’t do that,” Margie offered while taking some deep breaths. “I told you I didn’t want to argue. I don’t want to ‘discuss,’ either, because that will escalate. You already know my responses, so a fight will just recycle what has been already said. I am sitting here privately so I can cool down, and I suggest you should go back to the office and cool down as well so we don’t fight.”

Failure to Look Within

Since Margie made it apparent she was not going to get sucked into a pointless argument, Martin went back to the office.

Three days later, at breakfast, Martin innocently raised the following question to Margie: “So what would you say to a tech support guy who is not being helpful to you?”

Here we go again, Margie thought. This question was odd because over the years she had literally given him scripts of what he could say to people to get them to take responsibility for their failure to deliver service. But all that stuff never stuck. It was easier for Martin to not think at all. He could just react in the moment in the same way as always without allowing life to teach him anything new.

This was another revelation for Margie. She realized that without reviewing in his mind all the many options he could have, he would never take her advice and never hear her pain. And she did not want to play therapist with him. No wife should have to do that.

Margie was so tired of this. “I think we need a marriage counselor,” Margie replied. “I am out of ideas. I’ve answered your question before, but you’ve forgotten it. Maybe a counselor can explain it better than I can.”

Getting People to Therapy

“What do I need a counselor for?” Martin exploded. “Now you’re making me crazy, too?”

“People go to therapy when they are not happy and can’t figure out how to solve their problems. That’s the position we are in. Are you happy?”

“No,” Martin admitted. “But if you were to accept me as I am, then I would be happy.”

“I tried to for decades,” Margie answered, “but I no longer can. Your worldview is not nice and it has to change.”

“Oh, so you want to change me!” Martin complained.

“Something’s got to give if we are not happy. That’s my last word on this,” Margie concluded.