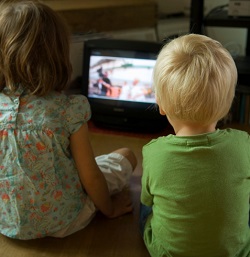 Parents, educators, and pediatricians have long expressed concern about the effects fast-food advertising has on children. The American Academy of Pediatrics reports that, on average, children watch four hours of television each day and that they see an average of 20,000 commercials every year.  According to a new study, those advertisements work. Children who are familiar with fast-food logos and other advertising are more likely to encounter weight problems.

To evaluate the effects of unhealthy-food advertising, researchers interviewed 3- to 5-year-olds about their knowledge of fast-food logos and other food brands. The children had to pair food-related marketing materials such as logos and cartoon characters with the foods the marketing materials represented. Children who were highly familiar with fast-food and other unhealthy food brands were more likely to have a high body mass index (BMI). This finding is extremely important for the fight to reduce obesity, since obese children are at an increased risk of becoming obese adults.

Researchers did find that children who exercised were less likely to have a high BMI, even if those children were familiar with fast-food marketing materials. However, in a second study group, researchers were unable to duplicate these results related to exercise.

Limiting the Effects of Advertising on Children

Advertising is everywhere. Many children pass dozens of billboards and signs on the way to school, and an advertisement may be your screen saver on your tablet. It’s impossible to completely shield children from advertising, but parents can take the following steps to limit advertising’s reach: