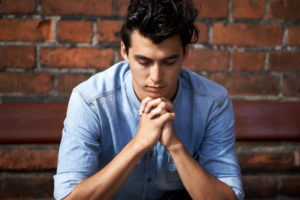 Many of us are raised to follow a particular religion, and many of those religions have some negative messages about sexual and gender diversity. These early religious messages can have a significant impact on the way LGBTQIA individuals perceive themselves, their sexual orientation and gender identity, and their self-worth.

Some people find leaving the religious organization they were raised to follow is the choice that best enables them to live as their true selves. Still, even those who have taken this action may continue to struggle with shame and guilt about being LGBTQ+. Others find their religion and spirituality are just as important to their identities as their gender and sexual orientation and struggle to reconcile all aspects of their identity.

The ideas of religion and sexuality have been at the forefront of my mind in recent months. Whether I am looking back on my own childhood experiences with religion and how those impacted my own sexual identity or witnessing affirming messages of inclusive churches during Pride week, I have long been interested in the ways LGBTQ+ people can move beyond negative messages about their identities in the face of ever-present religious pressures.

What really kicked off my interest in this topic was a recent conversation with a past Jehovah’s Witness who was excommunicated from his church when it was discovered he was gay. This person still felt a deep, burning desire to engage in his spiritual and religious beliefs and was constantly at odds with what his beliefs said about who he was as a person and his identity as a gay man. He felt as though he had to choose either his sexuality or his spirituality, and that if he chose to love who he wanted to love, he would be doomed eternally. As a result, his journey has been painful and alienating.

What are the impacts of this struggle on mental health? LGBTQ+ people raised in religious environments that do not affirm their identities often experience depression, anxiety, suicidal ideation, negative self-image, and addiction, among other concerns.

Internalized homophobia, which is the tendency to feel shame about being non-heterosexual or gender diverse, is more common in religious LGBTQ+ people (Barnes & Meyer, 2012), and is linked to experiences of depression, anxiety, and suicide. These painful experiences are often worse when someone grows up in a culture that does not accept who they are, and the experience can place a false sense of morality or choice on sexuality and gender.

Those raised according to the faith of a non-affirming religion may struggle to overcome internal feelings of guilt, shame, and stress. How can these be addressed?

One of the most important and effective ways to combat stress and shame resulting from non-affirming messages is to focus on maintaining positivity and self-love around your LGBTQ+ identity while engaging in self-reflection about your religious attitudes and whether they are helping you or not.

One option is to leave the religious group that fosters messages of shame and persecution, but the outcome of this choice could be feelings of spiritual emptiness, loneliness, and isolation from family, friends, and one’s community. Another option might be to question religious attitudes that feed internalized shame while maintaining your engagement with your religious community, but this may not give you enough distance from shame-based messages.

One of the most important and effective ways to combat stress and shame resulting from non-affirming messages is to focus on maintaining positivity and self-love around your LGBTQ+ identity while engaging in self-reflection about your religious attitudes and whether they are helping you or not (Page, Lindahl, & Malik, 2013). This is often a complicated task.

How can a person question negative messages about sexuality and gender learned through religion?