Is Your Cell Phone Making You Less Connected? 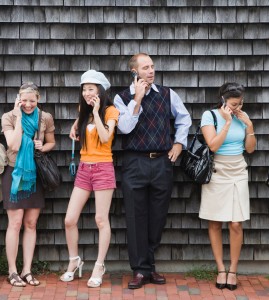 Are you in a serious and committed relationship with your cell phone? Do you find yourself texting instead of talking, sending hugs instead of giving them, and going through withdrawals when you have to power down your device?

If so, you are looking for love in all the wrong places. It may seem hard to believe, but back in the ’70s, before cell phones, voicemail, and tweets, we had to actually talk to each other. Despite the Skype hype, there is nothing that comes close to an authentic, flesh-and-bones connection to another human being. To see, touch, smell, or hear someone is important for bonding. If you get a text from a good friend, it may make you smile or warm your heart, but it pales in comparison to seeing the twinkle in his or her eye.

Having been recently immersed in emotionally focused couples therapy training, I was reminded that we are all wired from birth for attachment. Yes, even those who seem like loners or are fiercely independent crave connection sometimes. We long for the gaze and attention of “the other.” When our hearts connect and we make eye contact, we feel alive and emotionally secure. Our bodies become less anxious, our heart rates slow, and we are attached. This is the ultimate gift of friends, loved ones, and our treasured pets.

So what happens when your most gratifying attachments have a place for a plug? When you long for your iPad Mini more than your good friend Ginny? You may be left feeling empty, isolated, or even depressed.

Many people learned early in childhood that connecting to other people is fraught with conflict and danger. So, it makes sense that they might prefer to plug into cyberspace. Technology shields us from being too vulnerable or exposed emotionally. No one can see you cry, feel your rage, or witness your shame.

Personally, I’d rather deal with most problems face-to-face. Not because I enjoy arguments or disagreement, but because I enjoy the closeness that often results from repairing conflict and would feel a loss if I couldn’t see someone’s face soften as we made up.

Vulnerability is the glue that bonds partners, friends, parents, siblings, and pets. By constantly turning toward and listening to our devices, we are neglecting people. I see mothers walking their babies and talking on their cell phones amid their little ones’ cries. I see spouses texting at dinner while their significant others wear a feeling of insignificance. I see kids learning their ABCs on an iPad at dinnertime instead of learning how to connect emotionally with their parents and siblings.

We need to practice getting better at picking up social cues, making eye contact, and managing uncomfortable silences. These skills are essential to any relationship. Humans are social animals, and that doesn’t mean having 600 friends on Facebook. If you want an actual flesh-and-bones relationship, Google may help you find one but it can’t help you keep it. So, disconnect from your devices and plug into your greatest power source: the human heart.

If this article spoke to you and you feel you are too connected to your devices, please look for a therapist to help you learn how to safely unplug.