Is Monogamy the Only Way? Exploring Common Myths About Nonmonogamy 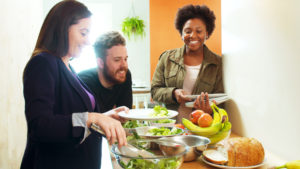 Despite an increase in public awareness of nonmonogamy, there continues to be a stigma around it that is grounded in myths about the risks of including more than two people in a relationship. If you have ever considered a nonmonogamous relationship, read on to learn about some of the myths and facts about nonmonogamy, and why monogamy might not be the only way to have a healthy, fulfilling relationship.

Myth: Sexual behavior outside of a monogamous relationship is inherently damaging to a relationship.

Infidelity is a painful issue that affects many relationships. The outcomes range from the breakdown of trust, to the dissolution of an otherwise happy relationship, to an increase in the risk of sexually transmitted infections (Conley, et al., 2012). But what if infidelity was not a failing of the person who strayed or of the person who was cheated on, but rather a symptom of not being able to meet the standards set by monogamy?

Specifically, some people cheat on their partners because their sexual and emotional needs are not fully met by one partner, but they are still generally happy with the relationship and do not want it to end. In the course of a longer-term relationship, it may be impossible for two people to meet each other’s needs all of the time. In this case, nonmonogamy may be an opportunity for committed partners to explore how each person’s needs can be met and to create a relationship style that works for them. When outside partners are discussed and agreed upon and open communication is a priority for all involved, there is less room for infidelity.

Given that most of us were raised to enter into monogamous relationships, breaking those barriers down and living in a different way can feel very uncomfortable. Nonmonogamous couples do tend to experience jealousy, fear of abandonment, and conflict as they establish boundaries and negotiate new relationship dynamics without role models to turn to (Weitzman, Davidson, & Phillips, 2009). These issues can arise in monogamous relationships as well, and working through them can build a healthier relationship overall.

A good therapist can help you and you partners explore what kind of relationship dynamic will work best for everyone involved, how to navigate jealousy and fear of abandonment, how to negotiate boundaries and ensure all parties are treated fairly, and how to disclose to the important people in your life.

Myth: People who do not want to make monogamous commitments are abnormal.

With monogamy so pervasive, it may seem as though those who are nonmonogamous are somehow abnormal or unhealthy (Conley, et al., 2012). This myth seems to be tied to beliefs about infidelity and culturally developed ideas of how romantic and sexual needs should be fulfilled. The difference between infidelity and consensual nonmonogamy is the communication and awareness of all people involved. Many monogamous marriages experience infidelity, and the lies and betrayal associated with that infidelity can shake the foundations of trust in the relationship. For the partner who strayed, it can shake their sense of self-worth and leave them feeling as if they have failed at something that society suggests is a natural ability. For the partner who was cheated on, it can feel as if they have failed at meeting the needs of their partner, that they are undesirable, or abandoned.

The pressure of a culture that pushes monogamy as the ideal, healthy, or only relationship option excludes those who feel most comfortable with nonmonogamous relationships or whose needs are not exactly in line with their partners. The result is often infidelity, serial monogamy, and internalized shame.

As you might have guessed, inviting additional people into your relationship in any way can lead to some challenges, including jealousy, communication issues, fear of abandonment, guilt, and negotiating acceptable sexual or romantic behavior with multiple partners (Weitzman, Davidson, & Phillips, 2009). Some polyamorous people find that the public stigma around nonmonogamy creates issues within their relationships, and they may struggle with disclosing to family members; having to hide their multiple partners due to perception, stigma, and concerns about discrimination; and a lack of legal protection regarding the custody of children (Cohen & Fevrier, 2017).

What If I Think I Might Want to Explore Nonmonogamy?

As nonmonogamy becomes increasingly common, there are growing numbers of resources available to people who may want to explore this as a relationship option. If you think nonmonogamy might be right for you, you can explore blogs and forums for polyamorous or nonmonogamous people. There are a few published book options as well, including The Ethical Slut by Dossie Easton and Janet Hardy, and Opening Up: A Guide to Creating and Sustaining Open Relationships by Tristan Taormino. These books outline many of the skills you may need to cultivate to have strong, loving, nonmonogamous relationships.

Finally, look for a therapist who is open to, and affirmative of, nonmonogamous relationships. A good therapist can help you and you partners explore what kind of relationship dynamic will work best for everyone involved, how to navigate jealousy and fear of abandonment, how to negotiate boundaries and ensure all parties are treated fairly, and how to disclose to the important people in your life.