Is Happiness in Marriage the Point or Merely a Benefit? 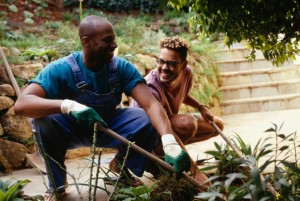 In light of the recent Supreme Court decision legalizing same-sex marriage across the nation, there has been a surge in the national dialogue about marriage in general. Although a range of opinions exist in response to the SCOTUS ruling, individuals on both sides of the debate are talking about the meaning and purpose of marriage with fervor and passion.

But why does marriage matter?

Marrying for love and happiness is a fairly recent phenomenon. Previous to democratization, which popularized the notion of individual rights and freedoms around the turn of the 14th century, individuals generally either participated in arranged marriages or married according to cultural norms for their social class, socio-economic status, gender, and/or birth order. Despite the fact individuals have not always prioritized attraction or emotions in marital decisions, modern Americans cherish the romance of marrying for love and happiness, as evidenced by just about every relationship narrative in the media today.

Marriage therapists often assist couples struggling with conflict, pain, or feelings of isolation in their marriage. If the purpose of marriage is to secure long-term personal and relational happiness, have these couples somehow failed?

In traditional marital vows from The Book of Common Prayer, couples commit “to have and to hold, from this day forward, for better, for worse, for richer, for poorer, in sickness and in health, until death do us part.” The weight of those words can feel far from romantic: they do not guarantee an image of blissful happiness that is typically associated with modern weddings. Could it be that marriage is not necessarily meant to make us happy?

Duke University ethics professor Stanley Hauerwas suggests that pursuit of marriage for the fulfillment of personal happiness “fails to appreciate the fact that we always marry the wrong person.” Hauwas writes, “We never know whom we marry; we just think we do. Or even if we first marry the right person, just give it a while and he or she will change. For marriage, being [the enormous thing it is] means we are not the same person after we have entered it. The primary challenge of marriage is learning how to love and care for the stranger to whom you find yourself married.”

Marriage is not merely a means to finding personal happiness; rather, it is an opportunity to demonstrate love to another person (and the family and community associated with that person) even in the midst of unhappiness. Let’s return once again to the traditional marriage vows: Are couples truly willing to embrace their words that marriage means to have and to hold … for worse … for poorer … and in sickness … until death do us part?

Are couples truly willing to embrace their words that marriage means to have and to hold … for worse … for poorer … and in sickness … until death do us part?

Today’s norm in American culture, which may be exacerbated through online dating, is to seek attractive partners with shared interests. It is reasonable to believe that engaging in a romantic relationship with someone who has these qualities will likely result in feelings of happiness, at least for a period of time. However, when inevitable stress or feelings of hurt impact the relationship, will the perceived value of the marriage decrease? Those who ascribe to the belief that the purpose of marriage is to seek happiness place themselves at risk of resentment, anger, or disappointment when their perceived personal needs for happiness in the relationship are not being fulfilled.

If, instead, the intent of marriage is to learn how to love one another and one’s community through sharing life together, happiness may be a welcomed benefit—but not the established primary goal.

Are one’s feelings in marriage irrelevant? Not at all. Spouses must tend to their own emotions and share them with their partners in order to increase intimacy and address relational problems. If one is suffering in marriage (e.g., if one is experiencing abuse, neglect, or addiction), feelings of distress may also be an important indicator that further action is needed.

Happiness is also important in marriage because it is a powerful motivator; couples who feel happy in their relationship will likely have more energy to work through relational challenges, learn relational skills, and seek opportunities to extend care in their marriages, families, and communities.

Individuals who marry tend to be happier than those who do not (Yap, Anusic, and Lucas, 2012). And yet, perhaps the point of marriage isn’t just to be “happily in love,” but rather to learn how to love through the act of continuously committing and extending care to one’s spouse even when circumstances are challenging.