Preparing for a Two-Faith Marriage 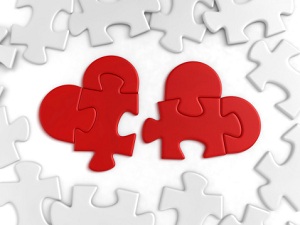 For thousands of years, people have expected their children to marry within their family faith and culture. Family life, in its largest sense, is easier this way. Marriage partners are easier to find among shared communities like synagogues, mosques, parochial schools or parishes; families know more about each other and often form smoother in-law relationships. Religious rituals bind partners to preceding generations as well as to their future children and to one another. All the thousand small, nearly invisible connections shared faith creates helps to enable more stable marriages and thicker, stronger emotional ties between parents, children, in-laws and the larger religious community.

It isn’t the distrust of the outside world as much as the desire to sustain the uniqueness of a specific religious worldview that has linked Catholic to Catholic, Jew to Jew, and Muslim to Muslim in marriage for generations. The practical, easier simplicity of shared meanings between spouses hold traditions and expectations in place. And so, for generations, parents have expected their children to partner with people of their faith traditions. This has been especially critical to religions that have relatively small numbers compared to the general population, as Jews, for example, are in the United States.

So, if a good young Jewish young woman, whose faith teaches her that mothers are the parent who “passes down” Jewish identity to her children, should begin to form a long-term relationship with a young adult male Gentile (a non-Jew), the tide of family anxiety may be loud. But now imagine a Jewish man planning to marry a Gentile woman: his children would not be considered religiously Jewish. The emotional hew and cry from his extended family may be so loud as to disrupt the planned marriage. While all this anxiety about blood lines and religious identity may be unwelcome and distressing, it’s quite understandable from a cultural point of view.

But it doesn’t make it easier to manage this all within your own family. So what’s a “mixed-faith marriage” couple to do?

1. Understand and respect the family’s loyalty to their faith. While the family’s comments and distress may be pointed at you, it’s really not about you, personally. It’s about your perceived possible intention of breaking community tradition and expectations.

2. Take your time. Be sure those thousand small communal connections of the faith become more visible to you and that you try them on for size. They need to fit you, or at least be interesting and acceptable enough to have them become part of your life. What is simply a bother now may become intolerable. And intolerable isn’t good; it will kill a marriage.

3. Negotiate before you commit. Work out the details of a future family life as much as you can. What is preferable (attending Sunday service) and what is mandatory (Baptism)? Can you tolerate these agreements for the long run? Are they mutual? Talk them through, and even write them down.

4. Can you agree to live within this negotiated difference? Expect this topic to never go away, but be a continuing area of adjustment, compromise, and some level of sacrifice for the both of you. The larger presence of extended families, religious holidays, rituals, leaders, and language will only increase this difference as you have children. Can you both embrace the long-term challenge in a positive, adjusted way?

The two-faith marriage couple is on the increase across Western culture. And while such unions can appear to weaken a minority faith, sharing traditions can also strengthen the tolerance, appreciation, and respect the majority has for minority traditions. It’s not all bad news! But a two-faith marriage is not easy, and is not for the faint of heart. Know what you need before you say “I do,” and your years together will much smoother.