Apology Accepted: How to Accept an Apology Without Making Things Worse 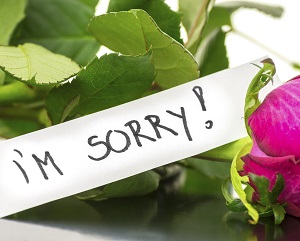 You’ve been hurt, wronged, let down, and now your spouse stands with an apology. What goes on in your mind? Let’s pause the scene, a mental pause, and play out different responses.

Scenario 1: You’re mad. You want to make your partner squirm a bit longer. Don’t you, as the wronged party, have the right to exact retribution? Maybe, you think, your partner shouldn’t get off easy. They need to feel the hurt and anger their actions have caused. Turn away, go in the other room, make your spouse work at extending the apology and earning forgiveness. If you give in too soon, your spouse will hurt you again. Make them wait until you are ready.

You can probably think of many more scenarios since each situation, relationship, and apology is unique and may require a different response. In my 20 years of practice as a therapist, I have seen couples struggle with both making and accepting apologies so they can return to an emotional closeness. If the situation for which your spouse apologizes is extreme, such as an affair, physical abuse, or lies, then acceptance of the apology is more complex. But for those day to day transgressions, here are some acceptance speeches I’ve seen work—that is, they are able to return to an emotional closeness after the apology.

My advice to you. When you accept an apology, give yourself mental pause to decide the best course of action for you, your spouse, your situation, and the particular wrongdoing. Keep in mind the long-term consequences to the relationship. Your goal is to return to emotional closeness.