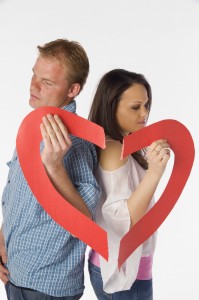 Children need answers just like adults do, but do not have the experience/wisdom to draw correct conclusions. Hence, many little girls with the aforementioned fathers conclude that their father’s absence or abusive/neglectful behavior is a result of their own defectiveness. They surmise that they deserve to experience abuse/be ignored rather than understand the truth, which is that their fathers were limited in their ability to healthily parent them.

When a father abandons his family, he is the defective one. Perhaps the father’s father abandoned him as well, or maybe the father was too self-centered to provide loving attention to his children. These neglected daughters often develop a chronic pattern in which they choose men who are abusive, neglectful, and rejecting, thus reenacting their dysfunctional relationship with their Dad.

Many women marvel about the odds of continuing to choose hurtful men, but there is no coincidence here. They are unconsciously selecting men who will disappoint and ultimately reject them. It feels familiar to them and human beings are creatures of habit.

The good news is that this unhealthy pattern of choosing unworthy men can be changed. The first step towards change is recognizing the unhealthy pattern and gaining insight with the therapist’s help into how it came to be.

The woman will need to forgive rather than chastise herself for her history of choosing abusive/unworthy men. She will learn that she did the best she could based on her family of origin dynamics. The therapist will educate the woman on the aspects of a healthy relationship which include mutual respect, trust, and the important concept of reciprocity.

The therapist will encourage the woman to look at her maladaptive relational style, which can also be changed. The woman may be a people-pleaser and/or “giver” who surrounds herself with “takers.” She may have little experience in being on the receiving end of a relationship.

The woman will learn that she has a right to have needs and to get those needs met in a relationship. She will be taught to look for “red flag” behaviors in a prospective partner i.e. potentially unhealthy/abusive actions. She will learn to set boundaries with others, and decide against continuing relationships with those who do not respect these boundaries.

She will learn that it’s not just OK, but healthy, to let prospective partners go who do not demonstrate a willingness to bring healthy relationship aspects to the table. She will acknowledge that her self-sabotaging relational style did not develop overnight, and therefore will accept and be patient with the pace in which she progresses towards a healthier relational style that will afford her satisfying future relationships.

Therapy can be supportive and validating as a woman begins to work through and discard her maladaptive relationship patterns. She will feel a sense of empowerment as she watches herself slowly emerge into the woman she was always meant to be: vital, confident, and loving toward herself as well as others. This healthy self-concept is the payoff of her work done in therapy, as well as a future with romantic partners who are deserving of her.