How ‘Helicopter Parenting’ May Be Helping Your Kids 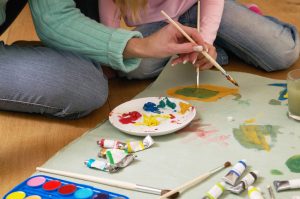 There have been countless articles—including some of my own—about the hazards of so-called “helicopter parenting,” the current trend of over-watchful, over-involved child rearing (also known as cosseting). By now, many people are familiar with stories of adult children who can’t leave home because they lack life skills, anxious teens whose schedules rival those of corporate CEOs, and parents who expect their toddlers to learn Mandarin and excel in five sports.

But in these times, when many of us feel alienated from our government, our neighbors, and sometimes our families, it’s worthwhile to rethink the benefits of kids being more connected to their parents. After all, parents started parenting this way for a reason. We were reacting against the free-form, unbounded childhoods we experienced, in which many of us faced daily dangers and years of floundering without oversight or steady guidance. We were the kids who came home to empty houses and wandered the neighborhood all afternoon, getting ourselves into physically and emotionally treacherous experiences. Because our parents were afraid to broach the subjects of sex, drugs, and violence, we got the information from our friends, who got all sorts of details wrong. As a result, many grew up feeling unseen, unsupported, and confused.

While helicoptering has its flaws—most notably how it often fails to teach kids how to think on their own and make bold decisions in the face of uncertainty—it also has many advantages, some of which have gone unheralded. Here are some of the reasons parents may choose to be very involved in their kids’ lives, and some of the benefits to both children and society.

Children, from the millennial generation to the current one, typically know that their parents have their backs. They grow up with a sense of security, knowing a framework is around them. This might give them more freedom to fail and to experiment, because someone is there to provide a net. Yes, young adults these days move in with their parents more often and rely on their families for financial support more than ever before. But this also allows them time to grow without as much pressure and danger as previous generations experienced.

Research has shown recently how the brain does not fully mature until our mid- to late-20s. Knowing this, why aren’t we more accepting of the idea that a 21-year-old college graduate might still need more time to feel fully launched? The average age to get married and have children has increased over the past few decades, and many people accept the idea that it might help to be more mature before leaping into these commitments. Likewise, young adults are taking longer to enter the workforce or buy a home; although economic factors contribute to that reality, couldn’t it be argued that it’s not necessarily the worst thing to delay these moves until they’re adequately prepared?

2. These kids feel seen and known.

Alice Miller writes in The Drama of the Gifted Child how parents who are preoccupied with meeting their own needs first can create children who feel unseen. Today’s parenting, however, tends to be highly focused on the child instead of the parents’ needs. While a degree of balance would be ideal, the value of this imbalance is that children these days know they are fully understood by their families. These kids get therapy, school testing, vocational evaluations, extracurricular trainings, and more. And while they may be overscheduled and over-observed, they are also privy to a large amount of information about their temperaments, skills, and interests.

The great thing about that is this generation of kids may not have as much of a struggle, or take as long, as previous generations did to know themselves. They may be able to make better partnerships and be better parents because they are not, as Miller writes, struggling to heal old wounds and blindly fighting the shadows of the past.

3. These kids have a sense of community and connectedness.

In the essay that spurred my thinking on this topic, Jennifer Trainor writes, “What if we are moving away from individualism and autonomy (with its requirements that we push away from our parents, rebel against the establishment and its institutions, like school) and entering a much more connected, inter-dependence?”

There are real benefits to doing something you’re bad at. It increases resilience, teaches how to hold onto self-esteem, and reduces perfectionism.

Trainor is asking this: Are we looking for the kind of communalism that marked American life in the beginning of the last century, when families lived with or nearby each other, neighbors helped one another, and people intrinsically trusted the government to be benevolent and generous? And does that desire to be close to others both encourage today’s parents to dote on their children and allow the children to stay close and reliant on their parents? A century ago, there was nothing wrong with, say, expecting your parents to help raise your children or provide you with a job. This gave people a sense of kinship and lineage. It sounds much more pleasant than the current overarching sense of alienation and existential loneliness.

4. These kids benefit from doing stuff they’re not good at.

Yes, our kids tend to have too many activities, leaving them without enough unstructured play time. But it also pushes them to persevere at pursuits they might not have thought of on their own, even though they may not excel at them. Thirty years ago, kids tended to gravitate toward one pastime—usually something they had an affinity for—and stuck with it. We rarely tried our hands at many different sports or arts, and as as result we were less well-rounded.

There are real benefits to doing something you’re bad at. It increases resilience, teaches how to hold onto self-esteem, and reduces perfectionism. To be the slowest runner on the soccer field week after week demands a huge amount of persistence, which years later can give kids a major leg up in the business world.

5. These kids have tried a little of everything and thus are better equipped to make good career choices.

Speaking of the business world, trying their hand at so many recreational activities may also help this generation of children to pick job fields. Compared to teens of the past, they may have a higher awareness of themselves at a young age. The parents who have driven them to music lessons, football games, and chess club meetings have instilled in these kids the knowledge that they are good at organization, perhaps, or lousy at spatial relations. These pieces of information give them a sense of what they have to offer to employers and which fields might be best avoided.

6. These kids will take care of us (and pass on the same family values).

Finally, there’s an upside to parents as well as to kids. In addition to having children who like us and want to stay in touch, we may also be creating a community with an overall sense of family connectedness. As they grow, children who were parented closely often want to remain close. Perhaps this will diminish the fears we have about an aging society, where seniors become lonely and neglected. Perhaps, just perhaps, helicoptered children may someday hover over their parents and return the favor.

There’s a lot of fear in society about the ways technology creates distance and isolation. We look at the younger generations with their heads buried in their phones and wonder if they will know how to make conversation or form connections. But we forget that, even on those phones, they are in constant communication—not only with their friends, but with us. Through this lens, helicopter parenting might be considered an antidote to the loneliness of the digital age, a way to create snug, loving bonds with our children.