How an Eclipse Overshadowed Differences and Illuminated Our Humanity 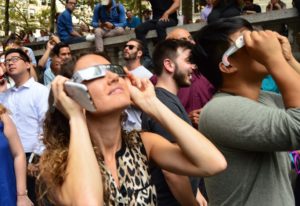 “Every moment of light and dark is a miracle.” —Walt Whitman

Did you see what I saw yesterday?

I’m not referring to the eclipse. What I’m talking about is the magnificent spectacle of tens of millions of Americans joining together to bear witness to this incredible event with wonder and curiosity. As the moon crept in front of the sun, it was as though judgment, disparity, and differences were wiped out for a few moments as well. Strangers came together to stare at the sky and seemed to symbolically acknowledge, “We ALL share the same sun, moon, and sky. Perhaps we’re more alike than we care to admit.”

Though businesses lamented the unavoidable loss in productivity as employees took time off or stepped out for more than a 15-minute break, there was much to be gained. Pictures posted on social media depicted people stopped on city streets, standing still instead of racing at a sprinter’s pace, smiling at what they saw beyond the tops of the tall buildings above them. I heard stories about people not knowing each other but venturing to ask if they could borrow glasses just to catch a glimpse, and how those fortunate to have those glasses obliged or offered up front, wanting to share the wonder they were experiencing. There was enough amazement to go around.

People gathered in fields and parks. People connected to those in other parts of the country to capture what they could not see themselves; people were interested in others’ perspectives. A sense of community was created. Those watching the eclipse, especially those in the path of totality, erupted with collective gasps, sighs, and emotional responses.

Where there were clouds, they provided a lesson. They reminded us that, though we can’t always see the wonder that is, we need to believe it’s there and that it might be revealed to us only in precious moments. If we aren’t present and paying attention, we might miss those moments. And even if we do, it’s important to acknowledge they exist.

Where I live, I saw only a partial eclipse. It was really something to see the sun swap shapes with the moon. Was that a lesson as well? We can better appreciate one another when we step into each other’s shoes, if just for a while. The moon appeared dominant as the sun assumed the shape first of a cookie with a bite taken out of it, and then slowly morphed into a crescent that seemed to turn in the sky as the moon chased it.

The pictures and descriptions of “totality” were awe-inspiring: a black hole surrounded by glowing light. The contrast between the two was breathtaking. There was an end to the darkness as the light surrounded it. The shadow cast on the earth was temporary, enough to confuse some into feeling that night had come, only to be reassured by daylight a short while later. We can remember the eclipse and remind ourselves on the days that feel darkest to trust that light exists beyond them.

Even the animals were impacted, indicating how we are ALL influenced by our environment and how delicately balanced it is, the eclipse gently suggesting to us to grant the world we inhabit a greater measure of respect.

If the eclipse had a final message for us (aside from the mounds of scientific data we collected), it might have been to lower our eyes from the skies and look at each other with the very same sense of wonder, curiosity, respect, and appreciation. We don’t even need special glasses to do it.

“In the midst of darkness, light persists.” —Mahatma Gandhi