Hooked on Heroin: From the Streets to the Suburbs 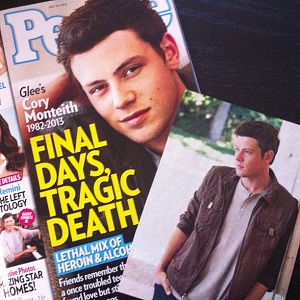 In mid-July, Glee star Cory Monteith was found dead in his Vancouver hotel room. The cause of death was found to be a combination of alcohol and heroin.

Recently, the United States has seen a spike in new initiates of heroin abuse, according to Michele Leonhart, head of the Drug Enforcement Administration. Heroin use is a growing problem for law enforcement, schools, and cities.

Young adults who are addicted to prescription painkillers often turn to heroin as a cheaper, more dangerous alternative. The effects of heroin are similar to pills: pain relief, drowsiness, sedation, addiction, etc. In fact, the National Institute on Drug Abuse says that almost half of teens and young adults who inject heroin said that they’ve abused prescription painkillers in the past.

The highly addictive opiate was first produced from morphine in 1874. Sometimes called “junk” or “smack,” heroin is typically thought of as an inner-city problem. Think of a heroin addict and one envisions a strung-out junkie with tracks on his or her arm. Today, heroin has a new face. It’s not just the inner-city population anymore—it’s affluent teenagers in the suburbs. It’s the Cory Monteiths of the world. The economics and demographics of heroin use have expanded over the years.

The drug can be snorted, smoked, or injected. The body’s reaction to heroin depends on how pure it is and what substances may have been mixed with it. Tolerance builds quickly. Long-term users can suffer from a variety of health concerns, including heart and lung disease. Injecting it into a vein can lead to collapsed veins, hepatitis, and HIV. “Skin popping” (injecting heroin under the skin) can produce round lesions and scars. After experiencing an initial high, the user feels drowsy and his or her breathing and heartbeat slow down.

A heroin overdose can result in seizures, a coma, or even death. Somebody experiencing an overdose would report difficulty breathing, dry mouth, lowered blood pressure, and a weak pulse. His or her tongue becomes discolored, pupils become constricted, and fingernails and lips turn blue.

Often in my practice, I have found young adults complain of “boredom” as being one of the reasons they turn to drugs to soothe their restlessness. What may be lacking for many of the young adults today is a sense of purpose or passion in their life. As I mentioned in my book, The Law of Sobriety, purpose is what guides your choices. If Monteith was working at his passion of acting and singing, he was certainly living a purposeful life. But perhaps he was bored and functioning on autopilot. It may be worth taking a look at what society can do as a culture to help young people nurture their dreams and their longings rather than watch them fall into the emotions of discontent and agitation. Everyone has a calling and a desire to have meaning in life. Finding one’s purpose may be one of the most important breakthroughs an addicted person can discover; it may even save his or her life.

The attempt to break free from heroin addiction will be accompanied by both painful physical side effects and a strong mental battle. Opiates are the most painful detox. During the body’s readjustment, temporary discomforts will no doubt be experienced, but it will be worth it in the end. When dealing with withdrawals, distraction can be beneficial. Shifting focus from the pain experienced to a television show or a book can aid the addicted person in forgetting about withdrawal symptoms for a period of time. A person addicted to heroin can only get clean when he or she decides to place long-term goals ahead of short-term interests.