Figuring Out Fatherhood: What Kind of Dad Do You Want to Be? 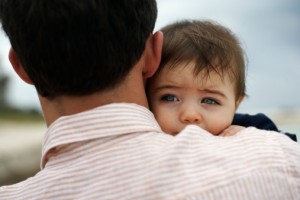 is a strange deal. It’s one role in life where there is a strong blueprint—we were all children once, and someone got us through those years—but there’s no easing in to it.

In the early days of any new job I’ve had, I’d wear that “training” badge for as long as I could. I’ve always been able to defer to someone above me who had the ultimate responsibility. When I was in retail, there was a manager. As an actor, there was a director. As a young social worker, there was always a supervisor.

A dad can’t say the same about a grandparent. The ultimate responsibility is yours. Even if you’ve been babysitting for years, even if you are the most involved uncle in the world, there is nothing that really prepares you for …

Read all the books (and blog posts) you want. One’s experience of fatherhood is going to be unique. It has to be, because we all are.

Deciding what kind of father you want to be is important and laughable at the same time. Laughable because the days, weeks, and years are unpredictable. Having a co-parent may make it easier, but it also introduces the unpredictability of another person.

The important part is that you want your parenting to be as intentional as possible.

Natural Parenting May Be Anything but Natural

Our main teacher(s) for this amazing, strange role is the person or people who parented us.

We may think they did an awesome job or a horrendous one, but most likely it was somewhere in between. They were like you in many ways. They were faced with a role they were not trained for, and they did what they felt was best. If you don’t give any thought to evaluating that parenting, and really looking at how you were parented, you’re likely to do one of two things:

Either way, you’re not parenting how you want to; you’re going on what you think is “instinctual,” but it’s either defaulted toward or against your parents. Either way, it’s not you who’s doing the parenting.

You are not your parent(s), and your child—take a breath, as this is hard to hear for some dads—is not you.

I’ve heard it said that no two siblings have the same parents. People not only parent differently because of who they are, they do so depending on circumstances and environment. For example, people who were parents in January 2001 were very different parents in January 2002. Where we are with regard to our relationships, our careers, our confidence levels, and the amount of support we have will influence how we parent, just like it influences everything else.

But what kind of father do you want to be to your kids? Are you going to be able to show them that men can be emotional? That men don’t have all the answers all the time and they can’t fix everything?

This isn’t a bad thing. It just is. And it needs to be thought about.

That’s what I mean by intentional parenting.

Many dads co-parenting in the 21st century have noticed their roles shift dramatically from what they observed their fathers doing. More is expected in some ways, and that can be a challenge—especially for men who expected that their roles would be more traditional. It’s not necessarily that everyone is learning new roles outside of tradition; it’s often that their roles are traditional plus.

Many fathers receive the message that they need to make a salary and feed, bathe, and change the baby. (We of course hear this about women, too, as they are often asked to do all they do as mothers and work full time.)

It’s not getting easier for anyone.

It Starts with Knowing Yourself

Intentional parenting can occur before you have the baby as well as after, and it’s ongoing. Some of this seems like common sense. You are probably aware that you’re going to be negotiating many of these roles, especially if you have a partner. You’re constantly figuring out who’s picking up who, when, and where, for example.

But what kind of father do you want to be to your kids? Are you going to be able to show them that men can be emotional? That men don’t have all the answers all the time and they can’t fix everything? Many people grew up with a father who represented the other side of all of that. Many had a remote father who would come in to “save the day” when mom supposedly got “too emotional.”

There are a lot of little and big decisions you’re going to be making every day. Why not have an intention set before embarking on this journey? It may take exorcising some ideas of what a man is and what a father should be. How connected are you to some of the more vulnerable emotions?

Many people have a child and then realize all the stuff they thought they figured out is still there. That’s fine. The important thing is that they are aware enough of their stuff that they realize when it’s getting in the way of being the father they want to be.

Have you decided on the father you intend to become?