How to Fight Cancer with Social Support 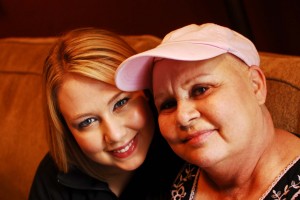 “Joanne” is 54 and has just been diagnosed with stage four pancreatic cancer. She finds this impossible to believe. She has only had a little back pain for a couple of months and figures she must have pulled a muscle in her aerobics class. Now, her oncologist is telling her she has a large tumor and metastases in her liver. He keeps talking but she doesn’t hear a thing he says. Something about chemo? Radiation? She’s too stunned to ask him any questions. She tunes back in just as he’s saying something about the cancer not being curable and her probably having less than a year to live. Joanne and her husband stumble out of the oncologists’s office and make their way home to their three children.

Joanne has a lot to think about. How does she even begin to make sense of this? Part of her wants to crawl into bed, pull the covers over her head and stay there. This just feels too overwhelming.

As Joanne begins to adjust to the reality of her diagnosis, she is inundated by well-meaning family and friends’ comments regarding her cancer: “Kick its ass!” “God doesn’t give you anything you can’t handle.” “My Aunt Edna had that and she was dead in three months!” “If you just eat right and think positive you can beat it.” and on and on. Now she is more confused than ever. If she doesn’t “think positive” all of the time, does that mean she’s not trying hard enough? Does that mean her cancer will be less responsive to treatment? If we follow that line of thinking to its logical end, Joanne will be responsible for the growth of her cancer if she isn’t a “fighter” 100% of the time. Does that seem right? Is it realistic to expect anyone to be “on” all of the time? Is it even fair to expect people to demand that of themselves? Everyone has a bad day now and then, and if you are on the rollercoaster ride of cancer and its treatment, ups and downs are even higher and lower.

A number of studies have looked at things such as how one’s attitude (including optimism about their prognosis, belief that their disease and/or its effects are controllable, and the decision to use healthy coping mechanisms) affects how well they adjust emotionally to their cancer. A “fighting spirit” is associated with better emotional adjustment in early stage cancers. The results are less clear with advanced cancers, due to flaws with the study designs, but do indicate that a positive attitude and being self-sufficient are associated with better emotional health, and dealing with problems actively versus avoiding them is also beneficial (Wattebot et al., 2010). This makes sense; as cancer becomes more widespread and people become more ill, it becomes harder to ignore the “elephant in the room” and requires the use of more unhealthy coping mechanisms to avoid it.

One reason people do try to ignore the obvious is to protect each other. Joanne will go to her bedroom to cry about her cancer because she doesn’t want to upset her husband or children. She thinks she needs to be strong for them. Her husband will withdraw because Joanne has never seen him cry and he’s not about to have that change now; he thinks he needs to be strong for her. Their children know mom has cancer but they don’t have any details. So, as children will do without knowledge, they assume the worst, that she will die very soon. They don’t want to ask any questions because they don’t want to upset their parents, so they cry alone in their rooms.

What people don’t realize in this situation is that everyone has the same feelings – fear, sadness and disbelief to name a few – and that holding them inside doesn’t protect anyone. It only serves to isolate them from each other. Thus, instead of helping each other out, they are actually suffering in silence and making things worse for each other.

Therefore, while it is unclear as to whether the quantity of one’s time is lengthened by social support, it is clear that the quality is. Joanne is going to fight this battle as hard as she can, knowing that on some days that will be more fiercely than others. She is going to make the most of whatever time she has left by focusing on whom she wants to spend time with and what she’d like to do. Joanne knows there will always be people who think she is handling this the wrong way, and she is going to try to avoid contact with them as much as she can.  At the end of the day, she is confident that she has made the right decision.

Related Articles:
Managing Fear and Uncertainty while Living with Cancer
How to Tell Young Children about a Parent’s Cancer
What Do I Say?